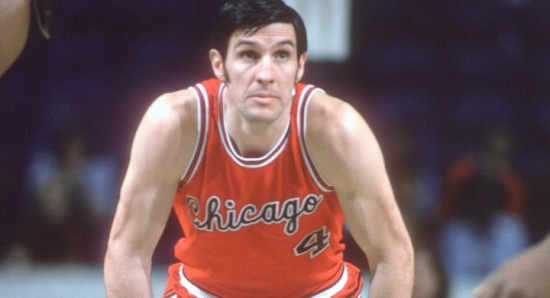 A two-time ICC (Indiana Collegiate Conference) Player of the Year when he was an Evansville Purple Ace, Jerry Sloan's professional career began with the Baltimore Bullets, but would only last there one year.  This was not due to a lack of skill, but rather because the Chicago Bulls were formed, and Sloan was taken in the 1966 Expansion Draft.

Playing mostly at Shooting Guard, Sloan played ten years with the Bulls, where he was an All-Star in his first and third year in the Windy City.  Sloan scored well enough, averaging 14.7 Points per Game for Chicago, and he never went below 10 PPG for a year while playing there.  Sloan's real calling card as a player was his defense, where he was a high-end rebounder for his position.  In his first six years with Chicago, Sloan never dipped below 7.0 Rebounds per Game, with three years going over eight.  Sloan was a four-time First Team All-Defensive Player and was twice named to the Second Team for his efforts.

Sloan retired in 1976 and immediately became a Scout and then an Assistant Coach for the Bulls two years later. Chicago also gave Sloan his first shot to be a Head Coach (1979), but as we all know (we assume you do), Sloan became a coaching legend and future Hall of Famer for his work helming the Utah Jazz.

An interesting fact, in 1978, Sloan, who became far more synonymous with the Jazz, was the first man to have his number retired by the Bulls.