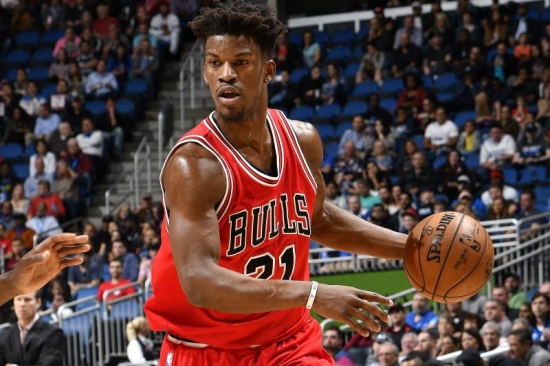 Jimmy Butler is an interesting basketball player.  He is phenomenal on the court, enigmatic off of it, and when his career ends, we want to see a detailed career retrospective on Butler in the vein of Jordan's "Last Dance."  We're serious; we find him fascinating!

Butler was a late First Round Pick in 2011, and “Jimmy Buckets” didn’t play much in his first year, averaging less than ten minutes per game.  He showed promise the following season, and he was a starter in 2013-14.  Butler became a good NBA player, but he was about to become great.

Butler went from 13.1 Points per Game in 2013-14 to 20.0 PPG in 2014-15 while playing the exact same number of Minutes per Game.  His PER shot up from 13.5 to 21.3, and Butler went to the All-Star Game and was named the Most Improved Player of the Year.  Butler proved he was no one-season fluke, but going to the All-Star Game the next two years, keeping his PPG over 20, and elevating his PER annually, peaking at 25.3 in 2016-17.  The Small Forward was a Third Team All-NBA Selection in 2016-17, and the three years before he was a Second Team All-Defensive player, showing off how Butler paid attention to both sides of the court.

As good as Butler became, he wasn't the player who Bulls management thought could lead the team to the big dance.  He was traded to the Minnesota Timberwolves on the 2017 Draft Day for younger talent, but this was a really good player whose contributions to Chicago we feel are undervalued.