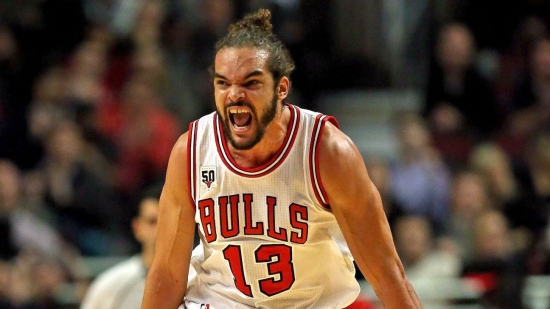 One of the more enduring scenes of the 2007 Draft was the image of Joakim Noah, in a suit that only he could wear, a Bulls cap on his head with a mountain of hair spilling out of it.  The son of the former tennis star, Yannick Noah, might have looked a little silly to some "traditional" viewers. What they should have been seeing was an excellent basketball player.

Noah was part of a trio with Corey Brewer and Al Jefferson that won two National Championships at Florida.  The Center was the Ninth Overall Pick in 2007 by the Chicago Bulls. They slowly worked Noah into their system, with him becoming a permanent starter in his third year, where he averaged a double-double (10.7 Points and 11.0 Rebounds). He did it again the following year (11.7 Points and 10.4 Rebounds) with a Second Team All-Defensive Selection as a reward.

Noah’s boarding average slipped below 10 in 2011-12 (9.8), but he followed that with his two best years as a basketball player.  Noah went to the All-Star Game in both 2013 and 2014, again with double-double averages. Noah’s defense was stellar in his timeframe as First Team All-Defensive in both years, and he won the coveted Defensive Player of the Year in 2013-14.

Noah's play slipped over the next two years, and his stay in Chicago ended when he signed with the New York Knicks in 2016.  With the Bulls, Noah had averaged 9.3 Points, 9.4 Rebounds, and 1.4 Blocks per Game.