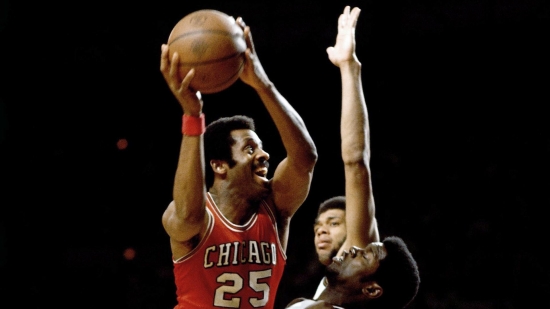 Walker’s NBA career began in 1962 as a Syracuse National, and when the team moved to Philadelphia and turned into 76ers, his career grew alongside his team's audience.  Walker was a three-time All-Star in Philly and a champion when the team won the title in 1967.  But this isn't a list about the greatest Sixers, is it?

Walker was traded to the Chicago Bulls in 1969, and he would do more with the rock as a Bull on a team that was far less talented overall than Philadelphia.  The Small Forward scoring efficiency was higher in Chicago, with his Field Goal Percentage going over .475 five times with Chicago, in comparison to his one time in Philadelphia.  Walker never had a Free Throw Percentage lower than .832 as a Bull, and he led the NBA in that stat in 1970-71 (.859).

The former Bradley Brave went to four All-Star Games with Chicago, and he averaged 20.5 Points per Game playing in the Windy City.

Walker entered the Naismith Basketball Hall of Fame in 2012.