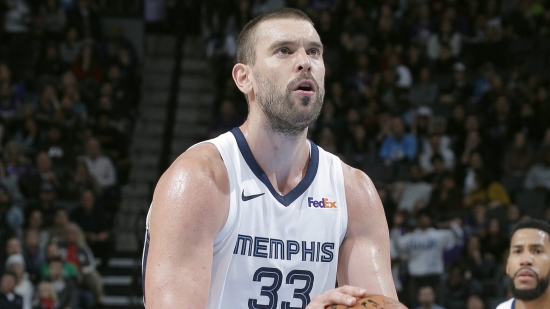 The younger brother of Pau Gasol, Marc Gasol carved a spectacular career in his own right and is far more than just the "second best" Gasol.

Gasol first arrived in the NBA with the Memphis Grizzlies in 2008, and he played there for over ten seasons, going to three All-Star Games, albeit on a level of obscurity, considering Memphis was not very good when he played.  The Spanish Center developed into one of the better defensive players who still could score, as shown by his eight 14-plus PPG years.  Twice named an All-NBA player, Gasol won the 2012-13 Defensive Player of the Year, again a fantastic accomplishment considering how rare Memphis was on any form of national television.

Late in his career, Gasol was traded to the Toronto Raptors, and his veteran presence aided the Raps in winning their first NBA Championship (2019).  Gasol concluded his NBA career with a final year as a Laker, but he will (and should be) remembered as one of the greatest Grizzlies of all time.

If you go by Gasol's NBA career, he might not have a Hall of Fame resume, but never forget the international components matter in Springfield.  A champion in the Spanish Leagues before he came to the States, Gasol represented Spain many times, winning two Olympic Silver Medals, two World Cup Gold Medals, and five medals (two Gold, one Silver, and two Bronze) in Eurobasket.  That is a big deal, making Gasol one of the most successful International players ever.

Should Marc Gasol be in the Hall of Fame?

More in this category: « J.J. Redick