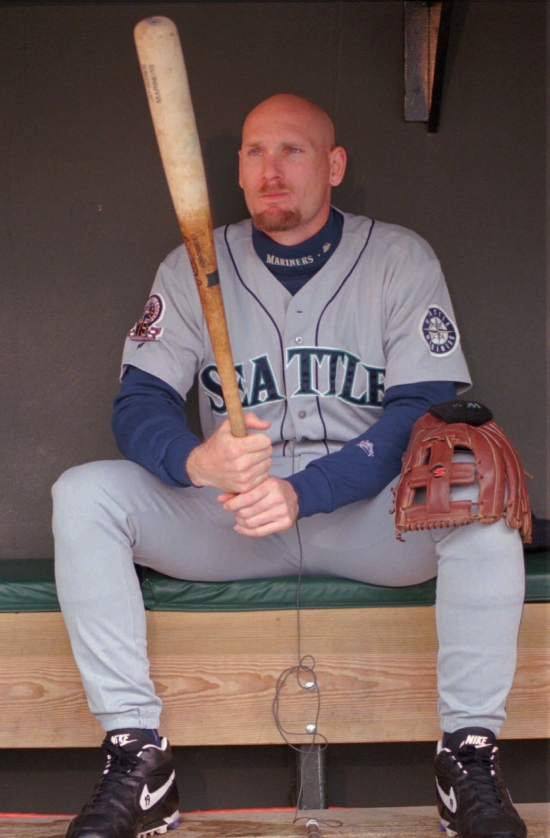 When learning that his son (erroneously) was dead from George Steinbrenner, Frank Costanza’s first response was:

How could we not open with this?

George’s dad was right, as he was traded for Ken Phelps, who was out of baseball two years later, and Buhner would go on to blast over 300 Home Runs for Seattle.

Buhner's power was not evident when he first arrived from that trade in 1988.  He had his first 20 Home Run season in 1991, and he would keep hitting that mark in the next three seasons.  It was in 1995 that the Rightfielder would begin the best run of his career.

That season, Buhner would go deep 40 times, including another four in the playoffs.  With 121 RBIs and a .566 Slugging Percentage, he would finish fifth in MVP voting, the highest of his career.  He would have even better power numbers with 44 Home Runs and 175 RBIs, and he would again have a 40 Home Run season in 1997 with 109 RBIs.

Where Buhner loses points is that he struck out a lot.  He would twice lead the AL in Strikeouts (1996 & 1997) and would go down 1,406 times as a Mariner.  Defensively, he may have had that strong arm, but he moved slow and usually had a Defensive bWAR with a negative integer.  In fact, the year won the Gold Glove (1996), he had a -0.7 Defensive bWAR.

Despite that, in terms of overall popularity, few can match the reception that the Mariners fans gave him.  His signature bald head (rare back then) and goatee made him stand out, and power hitters are always famous.  The Mariners would run a promotion called "Buhner Buzz Cut Night," where free tickets were given to anyone who would shave their head.

Buhner retired in 2001, and he would accumulate good numbers of 307 Home Runs with a .497 Slugging Percentage.