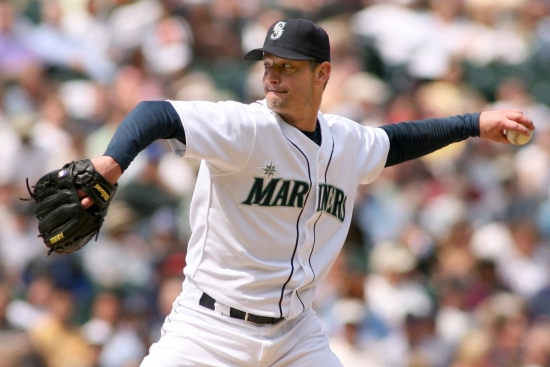 Jamie Moyer played an astounding 25 years in the Majors, and the crafty southpaw would spend 11 of them with the Seattle Mariners.

Moyer was traded from the Boston Red Sox during the 1996 season, and he would begin the most productive run of his career.  In his first full year with the Mariners, he went 17-5 with a 1.178 WHIP, which was good enough for sixth in the AL.  Moyer continued to be a winner for the Mariners, collecting at least 15 Wins in four of his seasons, two of which seeing him crack 20.  While he didn't have a great fastball, he had a substantial assortment of pitches; he was still able to get batters to strikeout.  He would have 1,239 with Seattle, again outstanding considering his lack of power on the mound.

He was never considered the best pitcher in the game, but he did have three years where he finished in the top six in Cy Young votes.  Moyer was only an All-Star once (2003), but he was so respected that he would also win that year, the Lou Gehrig Memorial Award, Hutch Award, and the Roberto Clemente Award.  He also won the Branch Rickey Award the season after.