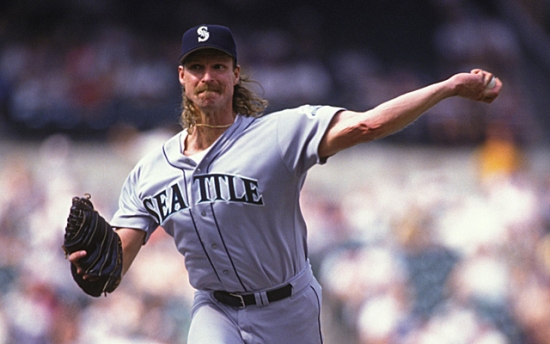 The Montreal Expos made a huge (a literal 6’ 10” mistake) when they dealt a young Randy Johnson to the Seattle Mariners early in the 1989 season.  It was evident immediately that there was something special as Johnson could strike out a lot of batters, but he had control problems.  It would, however, not take long for the "Big Unit" to become one of the stud pitchers in baseball.

In Johnson's first full season with the Mariners, he was named an All-Star, won 14 Games, and threw for 194 Strikeouts.  However, he would lead the AL in Walks allowed with 120.  1991 would see Johnson raise his Ks to 228 but again would walk far too many batters with 152, and 1992 was much of the same with 144 Walks and 241 Strikeouts.  Notably, that was the first of four straight years with the Mariners, where he was the American League leader.

The story goes that fellow flamethrower, Nolan Ryan, aided him in his delivery in late 1992, and it translated into better control.  Johnson was no longer walking batters at an alarming rate, and his ERA and WHIP dropped.  Even more impressively, his Strikeouts rose, as he had a 308 K season in 1993.  That year he won 19 Games and went to his second All-Star Game.  All-Star nods would follow in 1994 and 1995, with that last year being an incredible campaign for Johnson.  He would win the Cy Young with an 18-2 record and his first ERA title (2.48), and would also lead the American League in FIP (2.08) and WHIP (1.045).

Johnson was injured for most of 1996, and he rebounded with another All-Star year in 2007.  He was off in 2008, and as he was set to become a free agent, the Mariners traded him to the Houston Astros for their pennant drive.

If there is a criticism on Johnson as a Mariner, it was that he was 0-6 for Seattle in the playoffs.  While it is not relevant here, he did shake his post-season demons with the Arizona Diamondbacks in 2001.

Johnson was inducted into the Baseball Hall of Fame in 2015.