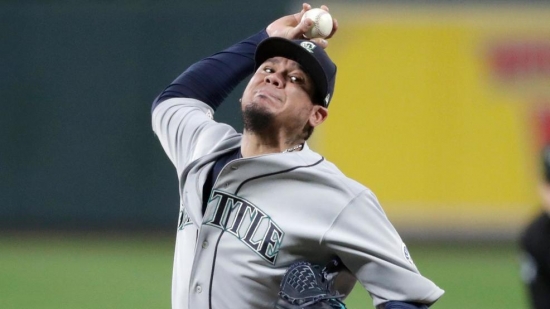 From Venezuela, Felix Hernandez signed with the Seattle Mariners as an Amateur Free Agent in 2002, with the hopes of following the footsteps of his idol, Freddy Garcia.

In 2005, at age 19, Hernandez made his debut and would start 12 Games.  From there, Hernandez would begin his slow ascent to one of the best hurlers in the Game.  He would break out in 2009, with a league-leading 19 Wins, his first All-Star Game, and a second place finish in Cy Young voting.

Over the next six seasons, Hernandez, or rather "King Felix," was on top of the world.  Despite only winning 13 Games with 12 Losses (showing that Seattle was not giving him a lot of run support), Hernandez won the Cy Young.  That season he led the ERA with 2.27 and would throw for 232 Strikeouts.  The Venezuelan was a dominant force throwing for 200 Ks in six years in a row (2009-14).

Hernandez's 2010 Cy Young was his only win, but not the only time he was in consideration for it.  The six-time All-Star had four consecutive top eight finishes (2012-15) and was the runner-up in 2014.  That season, he would lead the American League in ERA, with a career-best 2.14.  His WHIP of 0.915, also placed him atop the leaderboard and was again a personal high.  In this time period, Hernandez hurled a perfect game, the first in Mariners history.

He would continue to pitch for Seattle until the 2019 season, but he would decline in the last few seasons.  He was no longer the Pitcher he once was, but Mariners fans treated him well regardless, remembering all the great things he accomplished playing in the state of Washington.

Hernandez would overall post a record of 169-136 with a 3.42 ERA and 2,524 Strikeouts.  He is the Mariners all-time franchise leader in Wins, Strikeouts, and Innings Pitched (2,729.2).  We have no problem saying that King Felix is the best Seattle Mariners Pitcher of all-time.