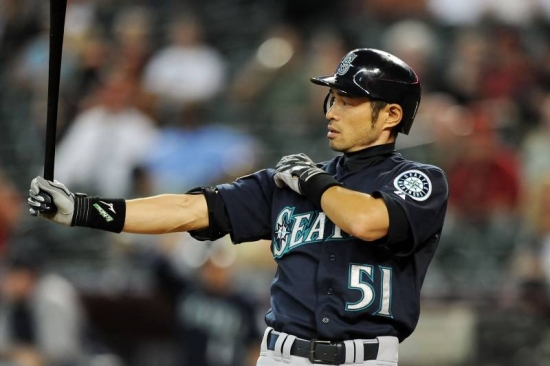 Like Edgar Martinez, Ichiro Suzuki received some consideration as the top Seattle Mariner of all-time, but instead, he will have to label him the best hitter for average in team history.

A case can be made that Ichiro was one of the greatest hitters of the game period.  The Japanese native did not debut in the Majors until he was 27, and he was still able to collect 3,089 Hits, 2,542 of them with Seattle.  If you add his hits in the Japanese League, he has more combined than Pete Rose.

Ichiro would debut in 2001 and immediately showed baseball fans why the Seattle Mariners spent so much to obtain him.  In his first season in Seattle, he would lead the American League in Hits (242), Batting Average (.350), Stolen Bases (56), and Batting Average (.350), and would win both the Rookie of the Year and MVP.  That was the only time that Ichiro would win the MVP, but he continued to accrue hits like people eat candy.  From 2001 to 2010, he always had at least 200 Hits and bat .300, with seven of those seasons seeing him lead the league.  In 2004, he would post 262 Hits with a .372 Batting Average, earning him his second Batting Title.  As a Mariner, he would have 438 Stolen Bases and used his speed to perform well in the Outfield, as shown by his ten Gold Gloves.  He would also be an All-Star ten times and was a three-time Silver Slugger.

He came back as a 44 year old Free Agent in 2018, playing 15 Games while only batting .205.  In May of that year, he would move to the Mariners Front Office but made a special return in the first two games of 2019, which were held in Japan, allowing to have to proper sendoff that a player of his stature deserved.

Ichiro is Hall of Fame eligible in 2025 and is a lock to be a first ballot entrant.  He left Seattle with a Batting Average of .321 and is the all-time franchise leader in that metric as well as Hits and Stolen Bases.