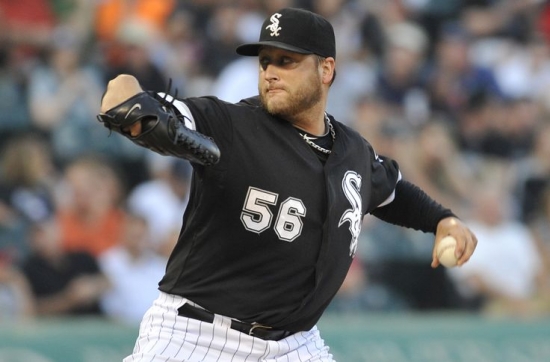 The ace of the White Sox staff throughout the first decade of the 2000s, Mark Buehrle relied on his finesse and ability to get batters to hit themselves out.  As it would turn out, he was damned good at it!

Buehrle was drafted in the 38th Round, and he would surprise everyone by being good enough to make the White Sox in 2000 when he debuted in July.  The following season, Beuhrle was a full-time starter and immediately went to the upper-echelon of hurlers with a 16-8 season and league-leading 1.066 WHIP.

An All-Star in 2002, Buehrle continued to be one of the higher end hurlers in the AL, and in 2005, he would earn his second All-Star Game honor, and finished fifth in Cy Young voting.  This was an especially sweet season for the southpaw as he would take his team to the World Series and make history as the first pitcher to start and save consecutive games.  This was Chicago’s first World Series win since 1917, and arguably this does not happen without Mark Buehrle.

Buehrle remained a strong presence for the White Sox over the next six seasons, continuing to provide his ten or more Wins every year.  In fact, from 2001 to 2011, he always had 10 Wins and posted only one losing record.  He would have a no-hitter in 2007, and a perfect game in 2009 and had his third and fourth All-Star Game for Chicago in 2006 and 2009.  He was also recognized for his fielding skills and won three Gold Gloves with Chicago.

Buehrle’s White Sox career ended when he signed with the Miami Marlins as a Free Agent after the 2011 Season.  With Chicago, he would accumulate a record of 161-119 with 1,396 Strikeouts.  Pretty good for a 38th Round Pick!