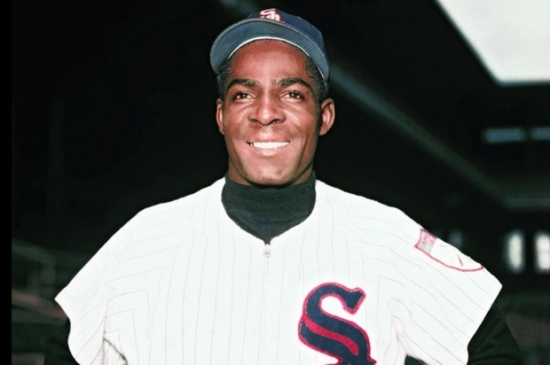 In terms of iconic figures, would have been wrong if we placed Minnie Minoso at number one?  Clearly, we didn't, but the native of Havana, Cuba, will always be one of the most revered athletes in the history of Chicago.

Still considered a rookie, he finished second to Gil McDougald for the Rookie of the Year, though White Sox fans felt he was snubbed considering he had better stats than the Yankee.  Nevertheless, he was named an All-Star, batted .326, was fourth in MVP voting, and was the American League leader in Triples (14) and Stolen Bases (31).  As the spark plug of the "Go-Go” Sox teams of the 50s, Minoso would continue to provide a hot bat with four more .300 seasons in the 1950s and two more Stolen Base titles.  He would be named an All-Star in 1952, 1953, 1954, and 1957.  He was also fourth in MVP voting twice more in 1953 and 1954.

The Cuban was one of the most selfless players in the game's history.  He made an art of getting hit by pitches, leading the lead in that painful category ten times (eight of them as a White Sox).  He was also an excellent defensive player, winning the inaugural Gold Glove Award in 1957, and another one for the White Sox in 1960.

Minoso was traded to Cleveland in 1958, but would be traded back in 1960.  That year, he would lead the AL in Hits (184) for the only time in his career, and earn his seventh All-Star and final All-Star Game appearance.  He also batted over .300 for the last time, and again was fourth in MVP balloting.  He was dealt to St. Louis Cardinals in 1962, thus seemingly ending his play with the White Sox.

Or so it seemed.

He came back in 1964 but was used mostly as a Pinch Hitter.  He decided that he wasn't done playing baseball, and he went to Mexico, where he played for eight seasons.  He came back as a coach, and would actually play a few games at age 50.  That was a publicity stunt, and White Sox ownership did that again when at age 54, he played a game in 1980.  They looked to do that again in 1990 but was blocked by Major League Baseball.