The Vancouver Canucks will retire the numbers of the Sedin Twins. 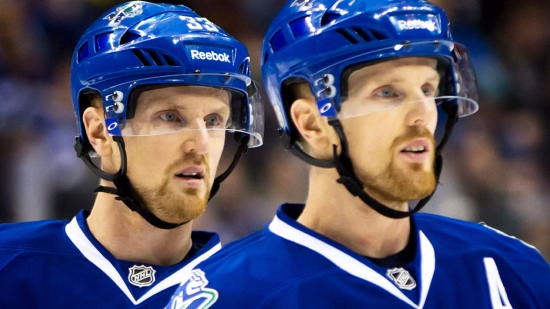 Regular visitors of Notinhalloffame.com know that we are slowly working on the top 50 of every major team in the NHL, NBA, NFL and MLB. Once that is done, we intend to look at how each team honor their past players and executive.  As such it is news to us that yesterday the Vancouver Canucks have announced that they will be retiring the numbers of both the Sedin (Daniel & Henrik) in February.

The Sedins were drafted 2nd(Daniel) and 3rd(Henrik) respectively in the 1999 Draft and the twins would play all 17 of his seasons with the Canucks and it when it was all said and done the brothers would become the best players in franchise history and they are the only siblings to exceed 1,000 Points each.

Not only are they having their numbers retired, the Canucks will be celebrating their accomplishments over three home games.   Danieland Henrikare eligible for the Hockey Hall of Fame in 2021 and will likely both enter on their first year of eligibility.

We here at Notinhalloffame.com would like to congratulate Daniel and Henrik Sedin for earning this very prestigious honor.

More in this category: « The Texas Rangers to retire Michael Young's #10 The Vancouver Canucks to induct Alex Burrows to their Ring of Honour »