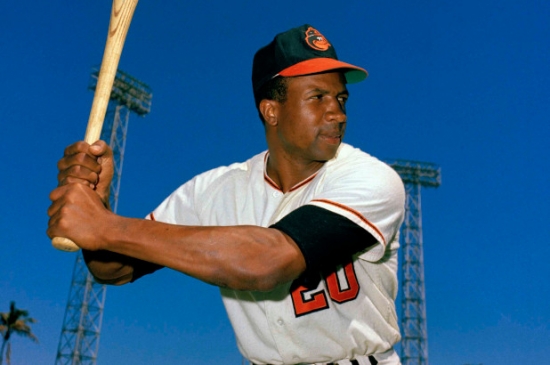 It is a tragic day in the world of Major League Baseball as Hall of Fame legend Frank Robinson passed away today at the age of 83.

Robinson would debut with the Cincinnati Reds in 1956 where he was named the National League Rookie of the Year and was the league leader in Runs Scored.  Robinson could do it all, hit for average, power and was good with his glove.  In his ten seasons with the Reds, Robinson would lead the NL in Slugging three times, was a six time All Star and was the 1961 National League MVP.

He was traded to the Baltimore Orioles where in his first season there (1966) he would blast a career high 49 Home Runs and would sweep the Slash Line and win the American League MVP making him the first player to win the MVP in both the NL and AL. He would also take the Orioles to their first World Series win since the relocation from St. Louis.  Robinson would again take the Orioles to a World Series win in 1970.  He would finish his playing career with the Los Angeles Dodgers, California Angels and Cleveland Indians.  He would finish with 2,943 Hits and 586 Home Runs.

In 1975, while he was still playing for the Indians, he would become the first African-American Manager.  Robinson would later manage the San Francisco Giants (1981-84), Baltimore Orioles (1988-89) and Montreal Expos/Washington Nationals (2002-06).

He would be inducted into the Baseball Hall of Fame in 1982 on his first year of eligibility.  The Indians, Reds and Orioles have all retired his #20 and all three franchises have a bronze statue erected in his honor at their respective stadiums.

We here at Notinhalloffame.com would like to extend our condolences to the friends, family and fans of Frank Robinson.