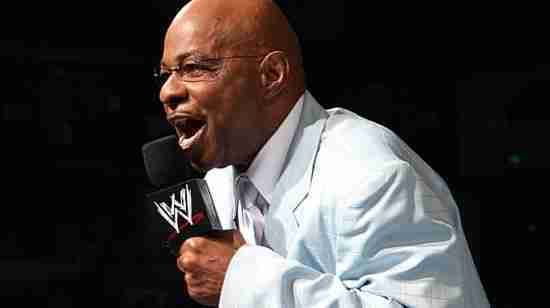 13 Feb
2017
Not in Hall of Fame
Speculated over the last month, Teddy Long has officially been named to the WWE Hall of Fame Class of 2017, joining already named inductees, Kurt Angle and the Rock and Roll Express.

Getting his start in Georgia Championship Wrestling as part of the ring crew, Long got into the ring as a last minute replacement for a referee, a role he would have for years and was regular fixture at NWA events.  Long would segue into managing after a fast count pin costing the Road Warriors the Tag Team Championship.  He was fired as a referee and became the manager of the Skyscrapers, the tandem of Danny Spivey and Sid Vicious who would feud with the Road Warriors.

Long would later manage Norman and following the dismantling of the Skyscrapers, he took over the reigns of Ron Simmons and Butch Reed (Doom) who would become the first African-American World Tag Team Championship.  Doom would break up in early 1991 and after the his remaining protégé, Johnny B. Badd turned face, Long would occasionally be used as a broadcaster.

Long would be in the corner often for Ron Simmons during his championship run and in the mid 90’s he was a face manager for lower card workers, but was never in another major angle in WCW again.  He would leave WCW for the WWF and would become a referee again.

History would repeat itself as after four years, Long would once again come back as a heel manager.  His charges included D-Lo Brown, Rodney Mack, Jazz, Christopher Nowinski, Mark Henry and Mark Jindrak.  While Long was entertaining, he did not have any major storylines, but in 2004, that would change when he would be named the General Manager of Smackdown.

Often, these positions don’t last long, but Teddy was in that role off and on for nearly ten years.  He was involved in major angles with Edge, Vickie Guerrero, the Undertaker and John Laurinitis.  It is unlikely if we will ever see a non-McMahon in an on-screen authority role longer with a tenure that reached Teddy Long’s.

We here would like to congratulate Teddy Long on earning this honor.
Last modified on Monday, 13 February 2017 22:11
Tagged under
Tweet

More in this category: « The Charlotte Hornets Top 50 has been revised RIP: George Steele and Ivan Koloff »