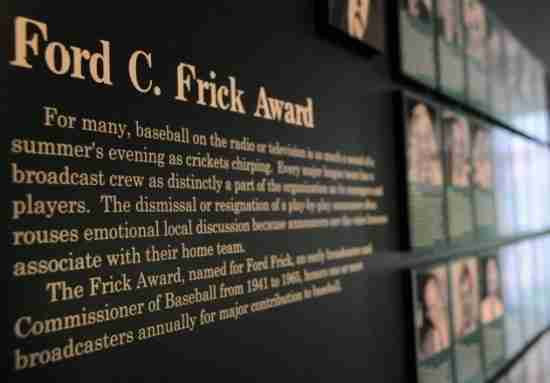 07 Nov
2016
Not in Hall of Fame
It’s that time of the season where we can put some serious thought into the Baseball Hall of Fame.

The Ford C. Frick Award is resented annually to the announcer who exemplifies excellence in broadcasting.  There are eight men who have been named Finalists for this prestigious honor, the recipient of which will be automatically entered into the Baseball Hall of Fame.

Gary Cohen, who joined the New York Mets broadcast team in 1989 and has been doing the broadcast ever since.  He has also done work for ESPN Radio in the playoffs.

Jacques Doucet, who did the play-by-play in French for the Montreal Expos from 1972 until the team’s relocation (to Washington) in 2004.  He has since taken over the French language broadcasts for the Toronto Blue Jays.

Ken “Hawk” Harrelson, a former one time All Star who has been the main television announcer for the Chicago White Sox since 1990.  Harrelson began broadcasting in 1975 and had stints covering the Boston Red Sox and New York Yankees before settling in Chicago.

Pat Hughes, who has been the radio play-by-play announcer for the Chicago Cubs since 1996, where he was famously paired with former Cubs great, Ron Santo for twelve years.  Hughes did the radio broadcasts for the Milwaukee Brewers for twelve years prior to his Cubs gig.

Bill King, who for twenty five (1981 to 2005) years was the voice of Oakland Athletics.  He would also call games for the Oakland Raiders and the Golden State Warriors.

Mike Krukow, who was a long time Starting Pitcher who was a one time All Star.  Krukow has been broadcasting San Francisco Giants games since 1990.

Ned Martin, who broadcasted Boston Red Sox games on both radio and television from 1961 to 1992.

Dewayne Staats, who has been broadcasting the Tampa Bay Rays games since their inception in 1998.

We here at Notinhalloffame.com would like to congratulate this group of Finalists and we eagerly await to see which one will be chosen for Cooperstown!
Tagged under
Tweet

More in this category: « The Pro Football HOF snubs the Stabler family James Hetfield wants Motorhead in the RRHOF »