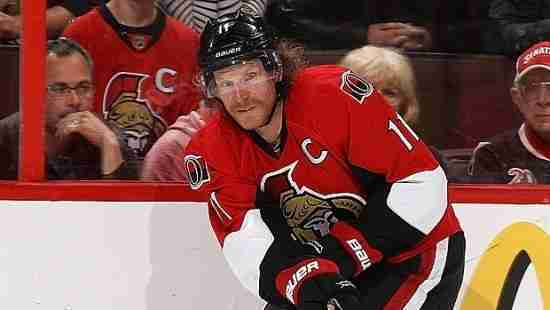 19 Aug
2016
Not in Hall of Fame
As we are working on the All-Time 50 players for each major North American franchise, we have the intent to eventually look at how each of those teams honor the past players/executives who worked for them.  With that in mind, it is major news to us that the Ottawa Senators have announced that they will retire the number of their former longtime forward, Daniel Alfredsson.

Alfredsson was the 6th Round Pick in the 1994 Draft and would join the Senators a year later where he would win the Calder Trophy as the Rookie of the Year.  The Swedish sniper played all but his final season with Ottawa and would score 1,108 Points.  He would be a six time All Star and was named a Second Team All Star in the 2005/06 campaign.

He is eligible for the Hockey Hall of Fame this year and was ranked #8 for HHOF consideration by us.

Alfredsson’s #11 marks the 2nd number retired by the Senators.  When they rebooted over 20 years ago, they retired the #9 of original Senators player, Frank Finnegan, who was part of the push to return hockey to Ottawa.

We here at Notinhalloffame.com would like to congratulate Daniel Alfredsson for this latest accolade.

More in this category: « The Top 50 Winnipeg Jets of All-Time are now up Andruw Jones enters the Atlanta Braves HOF »