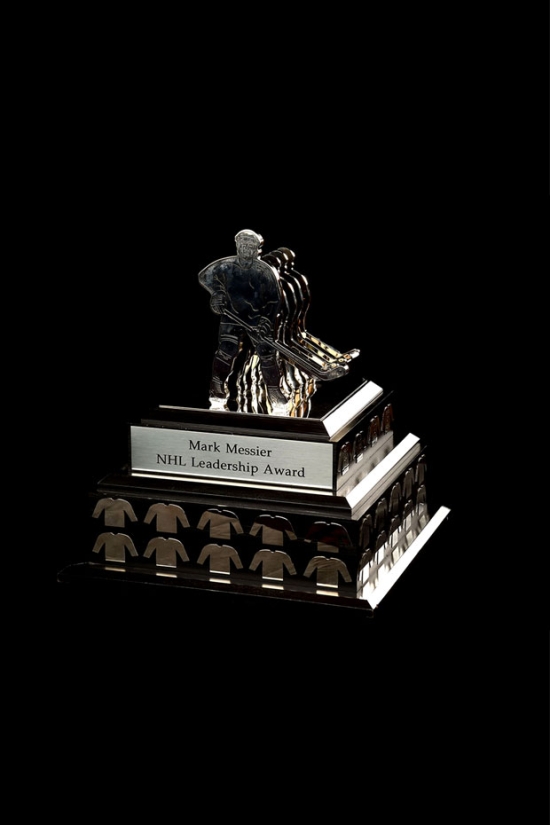 If you had asked us in 2006, we would have said there is no need for another individual hockey award.  We were wrong.

In the 2006/07 Season, five players were honored monthly as selected by the NHL based on qualifications, with Mark Messier deciding the recipient of the Mark Messier Leadership Award.  Those monthly winners were Brendan Shanahan (New York Rangers), Scott Niedermayer (Anaheim Ducks), Sidney Crosby (Pittsburgh Penguins), Vincent Lecavalier (Tampa Bay Lightning), and Roberto Luongo (Vancouver Canucks).  The year after, it was changed to being a yearly award.

There is no better player to name this after than Messier.  He is the only player to lead two NHL teams (Edmonton and New York) to a Stanley Cup as their captain.

The results are as follows:

There are currently five former Mark Messier Leadership winners who are Hockey Hall of Fame eligible, with four entering, yielding a percentage of 80.0.

As this award has never been a repeat winner, the percentage by year remains the same.

The following are the past players who have won the NHL Mark Messier Leadership Award and are eligible for the Hockey Hall of Fame, and have been enshrined.

At age 45, Chelios had been a leader for decades, and despite his age, he was in the NHL for three more seasons.  The American Defenseman had won three Norris Trophies, was a five-time First Team All-Star, and won three Stanley Cups, one with Montreal and two with Detroit.  It is hard to debate that this award did not get off to a perfect start.

This was Sundin’s penultimate year in the NHL and his last with the Toronto Maple Leafs.  A Maple Leaf since 1994, Sundin was a leader on the ice since day one and was Toronto's best player for over a decade.  He had previously been a Second Team All-Star twice.

Iginla was not just Calgary's leader but had been the Flames best player for years.  This was his third First Team All-Star season, and seven years before, he was the winner of both the Art Ross and Lester B. Pearson Awards.  Iginla would later play for Pittsburgh, Boston, Colorado, and Los Angeles.

Alfredsson was in his 17th and final year as an Ottawa Senator, and while he couldn't lead them to a Stanley Cup, he was the leader on many good Senator teams.  He played one more year in Detroit and scored 1157 career Points.

The following are the players who have won the NHL Mark Messier Leadership Award who are eligible for the Hockey Hall of Fame and have not been selected:

Since the franchise relocated from Winnipeg to Phoenix, Shane Doan was the franchise's best and most important player when they were in Arizona.  Doan led the Coyotes to a Conference Final this year, and he was with Phoenix for his entire 21-year career.

The following are the players who have won the NHL Mark Messier Leadership Award who have retired but have not met the mandatory years out of the game to qualify for the Hockey Hall of Fame:

Dustin Brown helped lead the Kings to a Stanley Cup in 2012 and did it again this season.  Brown was an All-Star in 2009.

For the second year in a row, the Mark Messier Leadership Award winner also won the King Clancy.  Engelland was the first Golden Knight to win this trophy, but with all due respect to the former Defenseman, he is the least likely Mark Messier Award winner to enter the Hockey Hall of Fame.

The following are the players who have won the NHL Mark Messier Leadership Award and are still active.

At age 23, it will be difficult to envision another Mark Messier Leadership Award winner to be younger than Sidney Crosby.  Crosby is a three-time Stanley Cup Champion.  This season, Crosby was in his fifth NHL season and was a Second Team All-Star and a Rocket Richard winner.  He was already a Hart Trophy winner and would be again four years later.

This season Toews led Chicago to their third (and his) Stanley Cup win of the decade.  The Center had previously been named a Second Team All-Star (2013), a Conn Smythe winner (2010), and a Frank J. Selke Trophy winner (2013).

Weber had been the core player in Nashville for years by this time, and before this Mark Messier Award, he was twice a First Team All-Star, twice a Second Team All-Star, and had five top-four finishes for the Norris Trophy.

This is the first and, to date, only Mark Messier Leadership winner who split his award-winning season between two years.  Simmonds was dealt from Philadelphia to Nashville for their playoff run, primarily due to his overall contributions as a Flyer, though do not discount what he did as a Predator.

Giordano is a late bloomer, winning his first Norris Trophy at age 35 and setting personal statistical bests.   Giordano played most of his career with Calgary and was their leader for years.

Bergeron is one of the best two-way players of his generation (if not the best) and was already a four-time Selke winner (he won a fifth a year after).  He won a Cup with the Bruins in 2011 and captured the King Clancy award in 2013.

Kopitar already anchored Los Angeles to two Stanley Cups (2012 & 2014), and the Slovenian Center added to his already ample trophy case (he had two Selkes and a Lady Byng) with the acquisition of the 2022 Mark Messier Leadership Award.

The Mark Messier Leadership Award is not exclusive to superstars, but the character requirement is off the chart.

More in this category: « The Maurice "Rocket" Richard Trophy