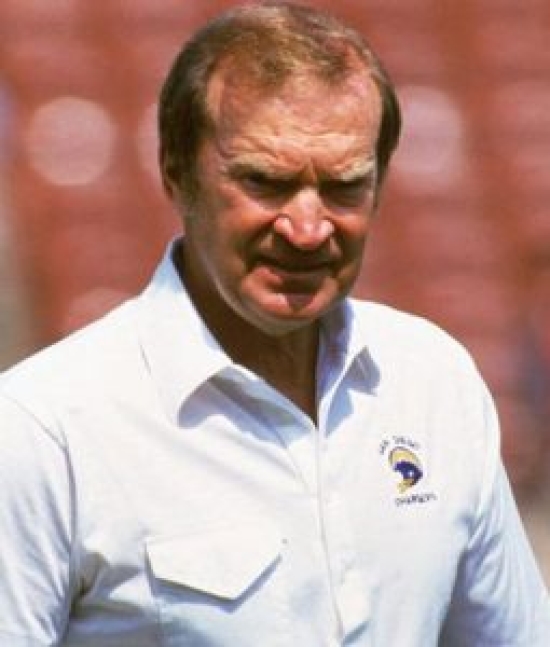 The Pro Football Hall of Fame announced today that Don Coryell has advanced as the 2023 Coach/Contributor Finalist.

Coryell is one of the most innovative minds in the history of Pro Football, having developed the Air Coryell” offense which is the prototype for today’s modern offense.  A Finalist six times before, Coryell’s creativity has never been in question, but it did not yield a Title, which is likely the reason that he has not been enshrined yet, but that day seems to be coming.  While this is not a lock for Coryell to get in, patterns indicate that this is his time.

The other Finalists who Coryell beat out were:

Roone Arledge:  Arledge was a powerful television industry executive and producer whose creativity, leadership and technical innovations revolutionized the presentation of both news and sports.  He was the brainchild behind Monday Night Football, and has never been a Finalist.

Frank “Bucko” Kilroy:  Kilroy worked in player personnel and scouting for the Philadelphia Eagles, Washington Redskins and Dallas Cowboys. He was the Patriots’ general manager from 1979 to 1982 and vice president from 1983 to 1993.  An outstanding player in his own right, Kilroy has a Finalist in 2020.

Robert Kraft: Kraft is the current Owner, Chairman and CEO of the New England Patriots since 1994. His teams have won six Super Bowls.  Kraft has never been a Finalist.

Art Rooney Jr.:  Employed with the Steelers since 1961, from 1964 through 1986, worked in the Steelers’ Scouting Department, Rooney is currently a Steelers Vice President and member of the Board of Directors.  He has never been a Finalist.

Clark Shaughnessy:  The former Head coach of the Los Angeles Rams from 1948-49 and longtime assistant coach for the Washington Redskins from 1944-47 and Chicago Bears from 1951-1962.  He was a three-time Finalist.

John Wooten:  A former nine-year Guard, Wooten was one of the first African-American executives in the NFL, working for the Philadelphia Eagles and Baltimore Ravens.

We here at Notinhalloffame would like to congratulate the late Don Coryell, for making it to this stage.

More in this category: « Pro Football Hall of Fame - NFL Teams With the Most Hall of Famers RIP: Len Dawson »