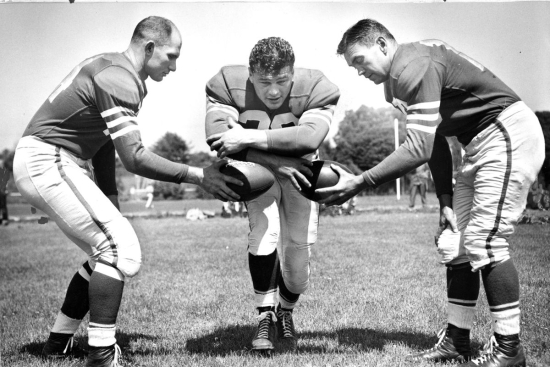 A First Round Pick from Washington, McElhenny and he was the starting Right Halfback as a rookie.  That season, and the one after, were First Team All-Pro and Pro Bowl worthy, and as he was also used as a returner, he led the NFL in All-Purpose Yards (1,731).

While McElhenny's rookie season was not duplicated, he had two other 1,400 APY years with San Francisco, and was a Pro Bowler on three different occasions, giving him five in total as a 49er.  McElhenny's run with San Francisco ended after the 1960 season when the Minnesota Vikings chose him in the Expansion Draft.  He added a sixth Pro Bowl in 1961 as a Viking, and he finished up his career in 1964 after also playing for the New York Giants and Detroit.

He had 8,528 Yards From Scrimmage with 58 Touchdowns over his 13-Year career.

McElhenny was named to the Pro Football Hall of Fame in 1970, was part of the first Niners Hall of Fame class in 2009.  San Francisco also retired his number 39.

We here at Notinhalloffame.com would like to offer our condolences to the fans, friends and family of Hugh McElhenny.

More in this category: « Rób Gronkowski Retires...Again The Hockey Hall of Fame selects six names for the Class of 2022 »