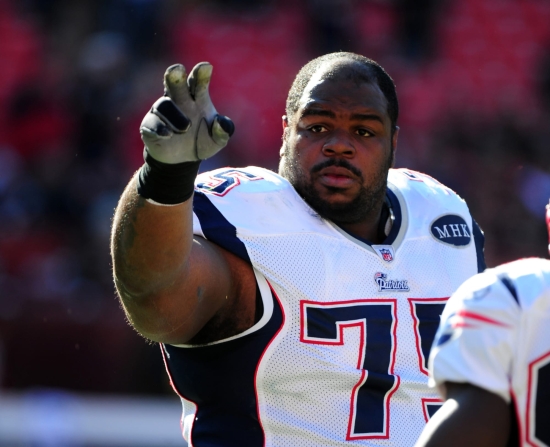 Regular visitors of Notinhalloffame.com know that we are slowly working on the top 50 of every major team in the NHL, NBA, NFL and MLB.  Once that is done, we intend to look at how each team honor their past players, coaches and executives.  As such, it is news to us that fans have inducted the Vince Wilfork into their franchise Hall of Fame.

A Nose Tackle/Defensive End/Defensive Tackle for the Pats from 2004 to 2014, Wilfork joined the team as a First Round Pick (21st Overall) from Miami (FL).

A larger-than-life figure, Wilfork helped lead New England to six AFC Championship Games, two Super Bowl wins in XXXIX and XLIX, and was chosen for five Pro Bowls and one First Team All-Pro.  The Patriots had a record of .778 when he played and the former Defensive co-captain recorded 16 Sacks and 517 Tackles for the team.  He played two final seasons (2015-16) for the Houston Texans before retiring.

Wilfork becomes the 32nd inductee of the Patriots Hall of Fame and only the sixth to enter on his first year of eligibility.  He beat out Logan Mankins and Mike Vrabel for the honor.  The date of the ceremony is to be determined.

We here at Notinhalloffame.com would like to congratulate Vince Wilfork for this impending honor.

More in this category: « Connor McDavid wins the first ever Notinhalloffame.com NHL Cup Alanis Morrissette named to the Canadian Songwriters Hall of Fame »