Sharmell named to the WWE Hall of Fame 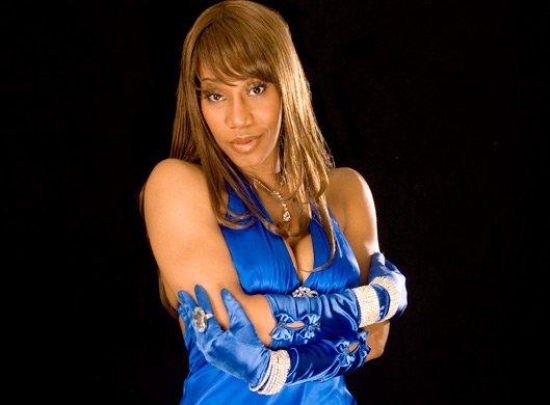 The third name to the WWE Hall of Fame has been announced, and we have to admit it is a bit of a headscratcher to us.

Joining the Undertaker and Vader, will be Sharmell, the wife of Hall of Famer, Booker T, who performed in the WWE alongside her husband in the mid-2000s.  This makes her the third African-American woman to enter the hall, following Jacqueline and Ethel Johnson.

The winner of the 1991 Miss Black America Pageant, Sharmell joined WCW in 1999 as “Storm” one of the Nitro Girls.  Later christened as “Paisley”, a valet for The Artist “Former Known as Prince Iaukea” and Kwee Wee, she would sign with the WWE following WCW’s demise in 2001.

Assigned to Ohio Valley Wrestling, Sharmell’s wrestling skills did improve, but she would later work a few months as an interviewer on Smackdown, but that only lasted for a few months before she left to pursue individual endeavors.

Marrying Booker T in 2005, she would later join her husband on screen, and when he won the King of the Ring, she was renamed “Queen Sharmell”, and the two would do their best work together, with the two even having a match against the Boogeyman at Wrestlemania 22.

Upset with the company, they left for TNA in 2007, where they wrestled for two years.

We here at Notinhalloffame.com would like to congratulate Sharmell for this impending honor.

More in this category: « Dolly Parton asks to be removed from the Rock and Roll HOF ballot RIP: Scott Hall »