The Pro Football Hall of Fame announces the Class of 2022 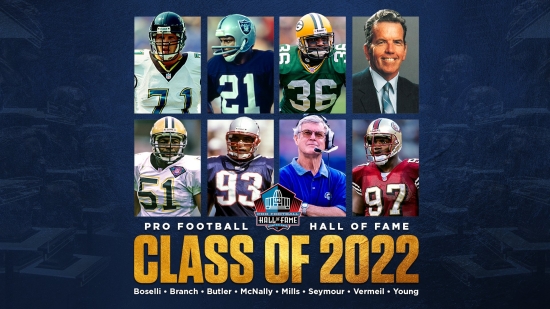 Last week, we here at Notinhalloffame.com had our mock Pro Football Hall of Fame Committee, where we debated came up with our Class of 2022, which consisted of Richard Seymour, Tony Boselli, LeRoy Butler, Devin Hester and Patrick Willis.

It was a transparent process, which you can see here, and like the actual Hall, we too, had previous shows where we debated who should reach the Semi-Finalists and Finalists.

Tonight, the Pro Football Hall of Fame came up with a different five than we did, and they announced that during the NFL Honors.

Let’s get right into who they chose:

Tony Boselli:  Tackle: 1995-01 Jacksonville Jaguars & 2002 Houston Texans.  The career of Boselli was short but impactful, but he is believed to be the greatest Jaguar of all-time. The Lineman was a Finalist for six years in a row, and it was widely speculated that he would be the next Offensive Lineman to get in, which has now come to fruition.  Jacksonville now has Canton representation.  Ranked #36 on Notinhalloffame.com.

LeRoy Butler: Safety: 1990-01 Green Bay Packers.  Butler had 38 career Interceptions, won a Super Bowl and went to four Pro Bowls over his career.  Entering on his third straight year as a Finalist, Butler’s HOF momentum has been the most gradual of any other former player who made it to the Finals.  Ranked #69 on Notinhalloffame.com.

Sam Mills:  Linebacker: 1986-94 New Orleans Saints & 1995-97 Carolina Panthers.  A five-time Pro Bowler, Mills began his pro career in the USFL, it was a now or never situation for Mills who was in his last year of eligibility. It turned out to be “now”, and Mills will not have to enter the bloated senior pool.  Ranked #40 on Notinhalloffame.com.

Bryant Young:  Defensive Tackle:  1994-07 San Francisco 49ers.  Young played his entire career with San Francisco where he won a Super Bowl as a rookie.  He went to four Pro Bowls, was a one-time First Team All-Pro and had 89.5 career Sacks.  This was arguably the biggest surprise, as his resume is not as strong as fellow Niner Finalist, Patrick Willis, but he is a worthy inductee.  Ranked #159 on Notinhalloffame.com.

The ten who did not make it:

Willie Anderson:  Right Tackle: 1996-07 Cincinnati Bengals & 2008 Baltimore Ravens:  Anderson is a three-time First Team All-Pro, four-time Pro Bowler, and was a Finalist for the first time after being eligible since 2014.  The Bengals success this year may not have translated into a Hall of Fame for Anderson, but he is on people’s radar exponentially more than it was two years ago.  That being said, Joe Thomas is eligible next year, and takes over as the biggest name Offensive Lineman on the ballot.  Ranked #268 on Notinhalloffame.com.

Ronde Barber:  Cornerback/Safety:  1997-12 Tampa Bay Buccaneers.  Barber is a former Super Bowl Champion and was the 2001 leader in Interceptions.  He has over 1,000 Solo Tackles with 47 career Interceptions.  Barber was a Finalist for the second time, and was in his sixth year of eligibility.  He will eventually join his teammates, John Lynch and Warren Sapp in Canton, but the arrival of Darrelle Revis on next year’s ballot will likely impact next year’s candidacy.   Ranked #10 on Notinhalloffame.com.

Devin Hester:  Wide Receiver/Returner:  2006-16 Chicago Bears. 2014-15 Atlanta Falcons, 2016 Baltimore Ravens & 2016 Seattle Seahawks.  Hester becomes a Finalist on his first year on the ballot, and he was the most feared returner of his day.  A three-time First Team All-Pro, Hester had 14,455 Return Yards and an all-time record 19 Return Touchdowns.  While he did not enter Canton this year, he will be the next Special Teams player to enter the Hall.  Ranked #103 on Notinhalloffame.com.

Andre Johnson:  Wide Receiver: 2003-16 Houston Texans, 2015 Indianapolis Colts 2016 Tennessee Titans.  Easily the best offensive player in Texans history, Johnson was a two-time leader in Receptions and Receiving Yards, and would amass 14,185 total Receiving Yards and 64 Touchdowns.  Johnson is a two-time First Team All-Pro and seven-time Pro Bowl Selection and was a Finalist in his first year of eligibility.  As we stated before, nobody who achieved that failed to make Canton, so his time is coming, though he is one of many top flight Wide Receivers who are eligible.  Ranked #30 on Notinhalloffame.com.

Torry Holt:  Wide Receiver:  1998-08 St. Louis Rams & 2009 Jacksonville Jaguars.  Holt won a Super Bowl with the Rams, and he went to seven Pro Bowls with 12,832 career Receiving Yards.  Holt is now a four-time Finalist, but the Wide Receiver position is loaded with worthy candidates, and with no Wide Receivers getting inducted this year, he faces the exact same scenario as next year.  Ranked #6 on Notinhalloffame.com.

DeMarcus Ware:  Linebacker:  2005-13 Dallas Cowboys & 2014-16 Denver Broncos:  Ware is a four-time First Team All-Pro and two-time Sack leader who had 138.5 Sacks overall.  Also, a nine-time Pro Bowl Selection, Ware helped Denver win Super Bowl 50.  He was a Finalist on his first year of eligibility, and of all the first time Finalists, we thought Ware would have the best shot, but he will have to wait.   Ranked #1 on Notinhalloffame.com.

Reggie Wayne:  Wide Receiver:  2001-14 Indianapolis Colts.  A six-time Pro Bowl and one-time Super Bowl Champion, Wayne has 14,345 Receiving Yards with 82 Touchdowns.  Wayne is now a Finalist in his first three years on the ballot, so he is likely to get in.  The question is just whether he gets in before, or in the same group as Holt and Johnson.  Ranked #9 on Notinhalloffame.com.

Patrick Willis:  Linebacker:  2007-14 San Francisco 49ers.  Willis played his entire career with San Francisco, and was a five-time First Team All-Pro Selection, went to seven Pro Bowls, and twice led the NFL in Tackles. He was in his third year of eligibility and was a Finalist for the first time, but the induction of Young should help him.  Ranked #15 on Notinhalloffame.com.

The five chosen will join:

Cliff Branch: Wide Receiver:  1972-85 Oakland/Los Angeles Raiders.  Branch was this year’s Senior Candidate and finally enters after first being eligible in 1991.  A game-breaker for the Raiders, Branch led the NFL in Receiving Yards in 1974, and helped take his team to three Super Bowl wins.  Ranked #11 on Noinhalloffame.com.

Dick Vermiel: Head Coach:  Vermiel had a career record of 120-109, and was known for turning horrific teams into championship contenders.  He won Super Bowl XXXIV, leading the Rams to their first Super Bowl win.

Art McNally:  Referee:  Finally, a referee enters the Pro Football Hall of Fame, with McNally earning his spot as this year’s Contributors Nominee.  He was the Director of Officiating from 1968 to 1991, with the game becoming more complex and the need for competent officials skyrocketing.

We will now begin our revision of our Notinhalloffame.com Football List, which will involve the following:

Removing the six former players who were chosen.

Adjust ranking based on your votes and comments.

More in this category: « Tuukka Rask retires Our All-Time Top 50 Arizona Diamondbacks have been updated to reflect the 2021 Season »