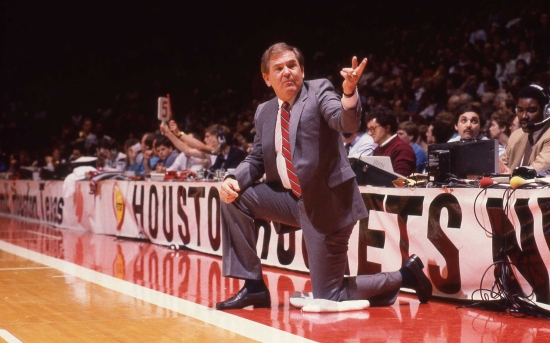 Basketball has lost one of the great ones as Bill Fitch passed away today.  He was 89 years old.

Playing his college ball at Coe, Fitch would later become their Head Coach.  He worked his way up the NCAA totem pole, helming North Dakota (1962-67), Bowling Green (1967-68) and Minnesota (1968-70) before earning an opportunity in the NBA to coach the expansion Cleveland Cavaliers.

The Cavs were dreadful due to a lack of talent, but he took them to an improbable Central Division Title in 1975-76, where the “Miracle at Richfield” Team made it to the Conference Finals, where they fell to Washington.  For his efforts, Fitch won the NBA Coach of the Year.

Fitch resigned in 1979 and took over in Boston, who had a losing record the year before.  The Celtics also drafted Larry Bird, and the team turned it all around, making the playoffs with Fitch winning his second NBA Coach of the Year.  The season after, Fitch led Boston to an NBA Title, the first and only for the Coach.  In 1996, Fitch was named one of the Top 10 Coaches in NBA History.

Fitch was inducted into the Naismith Basketball Hall of Fame in 2019.

We here at Notinhalloffame.com would like to extend our condolences to the fans, friends and family of Bill Fitch.

Kirk Buchner, "The Committee Chairman", is the owner and operator of the site.  Kirk can be contacted at [email protected] . Email This email address is being protected from spambots. You need JavaScript enabled to view it.
More in this category: « The Rock and Roll Hall of Fame announces the 2022 Finalists Jeff Francis named to the Canadian Baseball Hall of Fame »