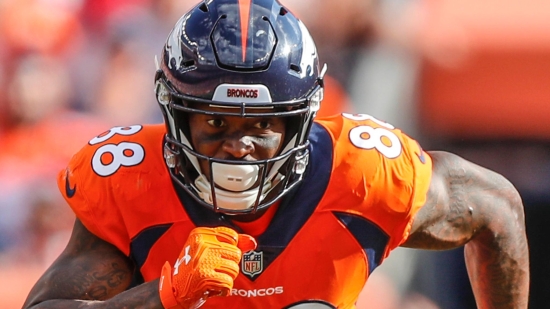 Last night, former Denver Broncos Wide Receiver, Demaryius Thomas, was found dead in his home in Georgia.  He was only 33 years old.

It is not known at this time how he passed, only that according to the police, it might have resulted from a medical issue.

A First Team All-ACC Selection from Georgia Tech, the Broncos selected him in the First Round (22nd Overall) in the 2010 Draft.  Thomas would become Denver’s top Wide Receiver, exceeding 1,000 Yards five years in a row (2012-16) and was chosen for four Pro Bowls.  He also helped the Broncos win Super Bowl 50, and set a then record 13 Receptions in Super Bowl XLVIII.  He retired after brief stops in Houston and the New York Jets, and left the game with 9,763 Yards and 63 Touchdowns.  He is currently second all-time in Receiving Yards for the Broncos.

We here at Notinhalloffame.com would like to extend our condolences to the fans, family and friends of Demaryius Thomas.

More in this category: « Our All-Time Top 50 Texas Rangers have been updated to reflect the 2021 Season RIP: Mike Nesmith »