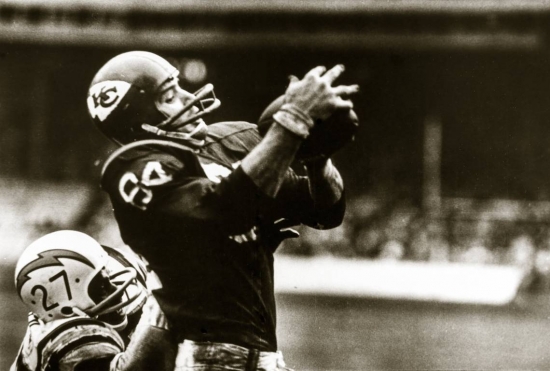 It was announced that former Kansas City Chief, Fred Arbanas, passed away at the age of 82.

Like many in the early '60s, Fred Arbanas was drafted by both the NFL and the AFL, but usually, those who chose the AFL were drafted higher by the new organization.  This wasn't the case with Arbanas, who was a 7th Round Selection by the Dallas Texans, where the St. Louis Cardinals in the 2nd Round.

No matter, as Arbanas would go on to the All-AFL Team at Tight End.  He was an AFL All-Star as a rookie, and with the Texans, he would help them win the Championship, but the organization would relocate to Kansas City, where they were rechristened as the Chiefs.  Arbanas would continue his elite status at TE, where he would have another four AFL All-Star appearances and had First Team All-Pro honors three times (1963, 1964 & 1966).  He would aid Kansas City in winning the AFL title in 1966 and 1969, the latter where he would win his only Super Bowl Ring (IV).

Arbanas retired after 1970, recording 3,101 Yards and 34 Touchdowns, both high numbers for someone who played his position in the 1960s.

In our latest Notinhalloffame.com list of those to consider for the Pro Football Hall of Fame, Arbanas was ranked #254.  Arbanas was inducted into the Kansas City Chiefs Hall of Fame in 1973.

We here at Notinhalloffame.com would like to extend our condolences to the friends, fans and family of Fred Arbanas.

More in this category: « Jay Bruce Retires Our All-Time Top 50 Indianapolis Colts have been revised to reflect the 2020 Season »