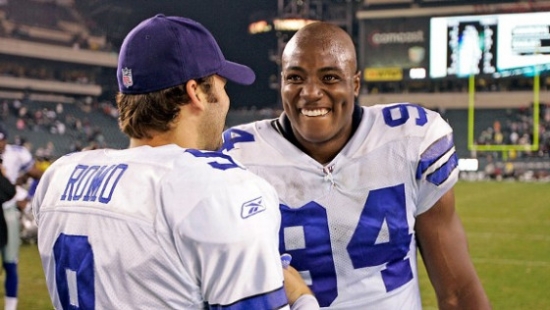 We are in the preliminary process of reworking our Notinhalloffame.com Football List, which ranks the top 300 former players who should be considered for the Pro Football Hall of Fame.  The top new entrant will be DeMarcus Ware, a nine-time Pro Bowl Linebacker, who played most of his career with the Dallas Cowboys.  Ware is expected to enter the Pro Football Hall of Fame on his first year of eligibility, but he was recently asked about his former teammate, Quarterback, Tony Romo.

“From his resume, yes.  If it’s going off championships, no.  If it’s one of those things where you’re looking at a Hall of Fame quarterback according to how many titles they won, he won’t make it.  But from the way he played and the stats that he put up, all of that? Yes.  He’ll make it for sure.  Especially with his image now in the media, being a big-time guy on television.  So, here is the perfect candidate for it.  To also promote the Hall of Fame classes and stuff, so it makes sense.”

We are not sure that we will be even ranking Romo in our top 300, but should we?

As always, we will be paying attention to Hall of Fame news, and look for our revised Football list next March.

More in this category: « RIP: Vincent Jackson Our All-Time Top 50 Minnesota Timberwolves have been revised »