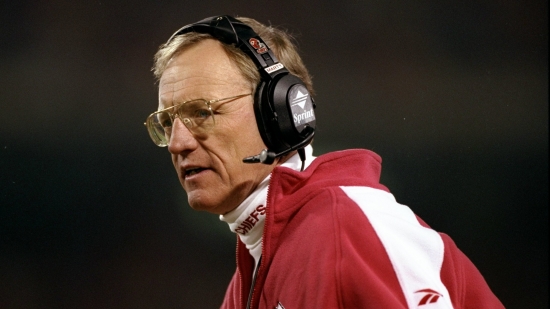 It was announced today that former NFL Head Coach, Marty Schottenheimer passed away today following a long battle with Alzheimer’s Disease.  He was 77 years old.

Schottenheimer played six years in pro football, four with Buffalo and two with the Boston Patriots. Schottenheimer went into coaching, and moved up to defensive coordinator by the Cleveland Browns in 1980.  Five years later, he became their head coach. Under Schottenheimer, Cleveland went to the AFC Championship Game in 1986 and 1987, and to the playoffs four out of five years.  Schottenheimer left Cleveland in 1988 for the Kansas City Chiefs after he and Browns owner, Art Modell, mutually parted ways.

From 1989 to 1997, Kansas City was either first or second in the AFC West going to the post-season seven times. The Chiefs made it is far as the AFC Championship Game in 1993, losing to Buffalo.  After a 7-9 1998 season, Schottenheimer resigned, and became an analyst for ESPN.

With San Diego, Schottenheimer only went to playoffs twice, but it looked like they were Super Bowl bound in 2006 following a 14-2 season, but they lost to the Patriots in their first playoff game.  That would be Schottenheimer’s last game as an NFL Head Coach, as clashes with ownership led to his dismissal.

We here at Notinhalloffame.com would like to extend our condolences to the friends, fans and family of Marty Schottenheimer.

Kirk Buchner, "The Committee Chairman", is the owner and operator of the site.  Kirk can be contacted at [email protected] . Email This email address is being protected from spambots. You need JavaScript enabled to view it.
More in this category: « The Pro Football Hall of Fame Announces 2021 Class RIP: Mary Wilson »