Awards = HOF?: Part Fifty-Seven: The Delivery Man of the Year 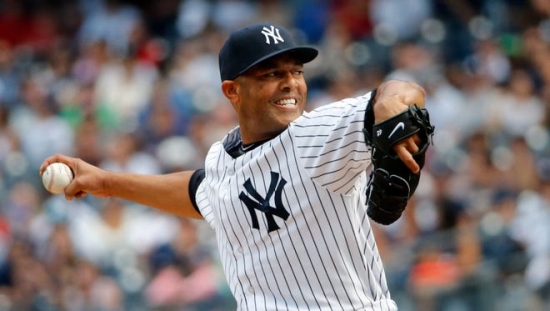 Last time, we looked at the now defunct Rolaids Reliever of the Year, an award that was mathematically calculated to honor the best closer. This time, we have another award from the past, in the Delivery Man of the Year.

So how many Delivery Man of the Year winners have made the Baseball Hall of Fame?

The following are the past players who have won the Delivery Man of the Year Award who are eligible for the Baseball Hall of Fame and have been enshrined.

Who else should win this first?  Rivera, who was also the Rolaids Reliever of the Year also led the American League in Games Finished (67), and this was the first year he had an ERA under 1.50.  He finished second in Cy Young voting and ninth in MVP voting.

An All-Star for the eighth time, Rivera again kept his ERA under two (1.80) and WHIP under one (0.960), a sick statistic considering he did that seven times!

This was Rivera’s third and final Delivery Man of the Year win and it also coincided with his fifth (and final) Rolaids Reliever of the Year Award. Rivera would later take the Yankees to another World Series win, his fifth.  He played until 2013, was a thirteen-time All-Star, and retired with 652 Saves, the most all-time.  Rivera entered the Baseball Hall of Fame with a perfect ballot, the first man to do so.

The following are the players who have won the Delivery Man of the Year who are eligible for the Baseball Hall of Fame and have not been selected:

After six years with the Houston Astros, Brad Lidge was traded to the Houston Astros where in his first year, he was an All-Star for the second time, won the Rolaids Relief Award, the Delivery Man of the Yeat, and helped the Phillies win the World Series.  He would also finish fourth in Cy Young voting.  Lidge played five more years, but it was up and down, and he never came close to his 2008 season again.  He retired with 225 Saves.

Eligible since 2018.  Lidge was on the ballot for one year on 2018 but did not receive any votes.  Unranked on Notinhalloffame.com.

Bell went back-to-back for the Rolaids Award, exceeding his 42 Save mark to 47.  Winning his only Delivery Man of the Year Award, this would be the only year where he dropped his ERA to below two, and he was an All-Star again.  Bell had 43 Saves in 2011, and was an All-Star for the third straight year.  His All-Star runs were over, as was his stay in San Diego.  Bell played three more seasons, one with Miami, Arizona and Tampa Bay, and accrued 168 Saves over his career.

Eligible since 2020.  Bell was on the ballot for one year on 2020 but did not receive any votes.  Unranked on Notinhalloffame.com.

Joining the Detroit Tigers in 2010, Valverde led the AL in Saves (49), Games Finished (70) and Games Pitched (75) this season. He would also win the Rolaids Reliever of the Year, and was fifth in Cy Young voting.  Valverde played until 2014, with a final year as a Met, and he accrued 288 Saves.

Eligible since 2020.  Valverde was on the ballot for one year but did not receive any votes.  Unranked on Notinhalloffame.com.

The following are the players who have won the Delivery Man of the Year Award in MLB who have retired but have not met the mandatory years out of the game to qualify for the Baseball Hall of Fame:

A year after finishing second for the Rookie of the Year and going to his first All-Game, Papelbon was again an All-Star, and the winner of the Delivery Man of the Year.  Papelbon and the Red Sox won the World Series that year, and he would later go to four more All-Star Games, continuing his career with Philadelphia and Washington.  He retired after 2016 with 368 career Saves.

Fernando Rodney debuted in 2002 at the age of 25, and a decade later after playing for the Detroit Tigers and Los Angeles Angels, he debuted for the Tampa Bay Rays and had a season unlike any other he had previously.  Rodney went to his first All-Star Game, and his ERA of 0.60 was anemic, as was his 0.777 WHIP.  Rodney was fifth in Cy Young voting.  He played another seven years, going to two more All-Star Games, one with Seattle and one with San Diego.  Rodney also played for Chicago (NL), Miami, Arizona, Minnesota, Oakland, and he closed his career with Washington in 2019, going out on top as a World Series Champion. He accumulated 327 Saves.

The following are the players who have won the Delivery Man of the Year who are still active.

Two year earlier, Craig Kimbrel won the National League Rookie of the Year while leading the NL in Saves (46).  The year after Kimbrel’s save totals were a little less this year (42), but was still league-leading, and it won him the last National League Rolaids Reliever of the Year of the Year Award.  This year, Kimbrel led the NL in Saves for the third straight year with 50, a career-high, and he was fourth in Cy Young voting.  Later in his career, Kimbrel won a World Series Ring with the Cubs.

The only way this tally changes is if Craig Kimbrel makes the Hall, as realistically, there are no other past winners who will make their ways to Cooperstown.

More in this category: « Our All-Time Top 50 Anaheim Ducks are now up RIP: Kevin Greene »