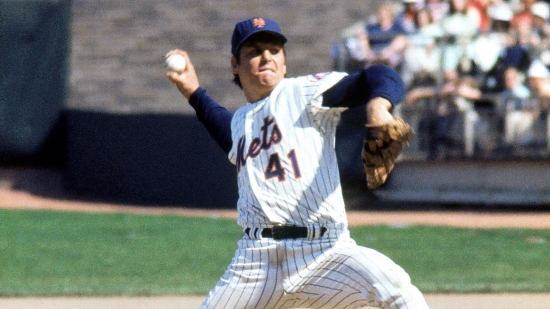 We are getting really tired of writing obituaries.

Tom Seaver, who has been battling dementia for the past few years, has passed away at age 75.

When Seaver debuted for the New York Mets in 1967, it was evident immediately that this was one special Pitcher that the Mets had on their hands.  Named the Rookie of the Year, Seaver was named an All-Star, and “Tom Terrific” would earn that honor 11 more times in his career.

Seaver is universally regarded as the greatest New York Met of all-time, and how could it he not be?  He was the anchor of the 1969 squad that shocked the baseball world winning the World Series for the “Miracle Mets”.  The Mets were considered underdogs, despite Seaver winning his first of three Cy Youngs that year.  With the Mets, Seaver won three ERA Titles, three WHIP Titles, and five Strikeout Titles.

The Mets shocked their fans by trading Seaver to Cincinnati during the 1977 season, and two of his All-Star appearances occurred as a Red.  Seaver would return to New York, and finished his career with the Chicago White Sox and Boston Red Sox.

We here at Notinhalloffame.com would like to extend our condolences to the friends, fans and family of Tom Seaver.