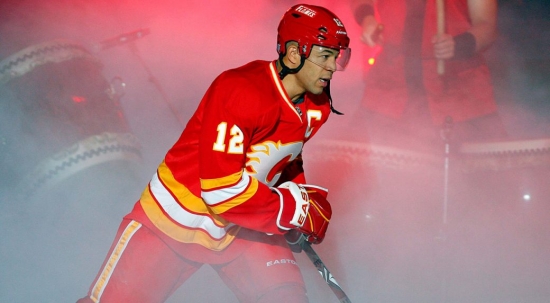 One of our favorite days our here!

The Hockey Hall of Fame has announced the Class of 2020, which while it usually takes place in June of 2020, the Stanley Cup is always awarded by now!  Regardless, the National Hockey League is coming back, and here are the new Hall of Famers who will watch the 2019-20 season play out.

The Hockey Hall of Fame Class of 2020 comprises six members and is headlined by Jarome Iginla, the one former player that everyone knew would be selected.  Iginla is joined by Marian Hossa, Kevin Lowe, Doug Wilson, Kim St- Pierre and Ken Holland who enters as a builder.

Iginla was a 20-year veteran of the NHL, playing the majority of his career with the Calgary Flames.  With Calgary, the native of Edmonton, Alberta, was a three-time First Team All-Star, a two-time Rocket Richard winner, and in 2001-02, he won the coveted Art Ross Trophy and the Lester B Pearson Award. Notably, no player who ever won the Art Ross has not been in enshrined in the Hockey Hall, and this trend continues today.  Professionally, Iginla also played for Pittsburgh, Boston, Colorado and Los Angeles and upon retirement he amassed an even 1,300 Points in 1,554 Games.  On the International scene, the power forward won two Gold Medals at the Olympics (2002 & 2010) and the World Cup of Hockey (2004) for Canada. He was ranked #1 on our last Notinhalloffame.com list of those to consider for the Hockey Hall.

Like Iginla, Hossa also enters the Hall in his first year of eligibility.  From Slovakia, Hossa came up through the Ottawa Senators organization, where he helped the Sens reach their first and only Stanley Cup Final in 2003. After a 100 Point year with the Atlanta Thrashers, and a one-year run each with Pittsburgh and Detroit, Hossa joined the Chicago Blackhawks in 2009 where he played until 2017 when a skin disorder forced him out of the game.  With the Blackhawks, Hossa was a huge cog in the machine that won three Stanley Cups (2010, 2013 & 2015).  Hossa’s NHL career would see him accrue 1,134 Points.  Representing Slovakia, Hossa competed for his country in three Olympics (2002, 2006 & 2010) and the World Cup of Hockey in 2004.  Hossa was ranked #10 on our last Notinhalloffame.com list.

Kevin Lowe.  Lowe was considered the best player from the Edmonton Oilers dynasty of five Stanley Cups (1984-90) that was yet to be in the Hall, and this ended today.  The Defenseman won five Cups with the Oilers and a sixth with the New York Rangers in 1994, and he was also the winner of the 1990 King Clancy Memorial Award.  Lowe has been eligible for the Hall since 2001, and he was ranked #37 on our latest list.

Doug Wilson.  Wilson’s induction takes off one of the few Norris Trophy winners off the yet-to-be enshrined list for the Hockey Hall. Playing most of his career with the Chicago Blackhawks, Wilson was an NHL All-Star seven times.  The Defenseman had 827 Points over 1,024 Games, and he was also a member of the 1984 Canada Cup winning team.  Was ranked #14 on our 2020 list.

Kim St-Pierre.  While Mike Richter, Curtis Joseph, Tom Barrasso and Mike Vernon did not get the call, one Goalie did in Kim St-Pierre.  The Canadian was a member of three Olympic Gold Medals and five World Championships for the Canadian Women’s Team.

Ken Holland is this year’s lone builder.  Holland was a decent hockey player in his own right, making it to the NFL for four games as a Goalie for Hartford and Detroit.  His biggest accomplishments was as the General Manger of the Red Wings, where he built teams that won the Stanley Cup three times.

We will be revamping our Notinhalloffame.com hockey list shortly, that will reflect the deletion of the new entries, and the addition of those eligible in 2021. Rankings will also be altered based on your votes and comments.

We here at Notinhalloffame.com would like to congratulate to newest members of the Hockey Hall of Fame,

More in this category: « The Washington Redskins to retire Bobby Mitchell's number 49. Our All-Time Top 50 Boston Red Sox are now up »