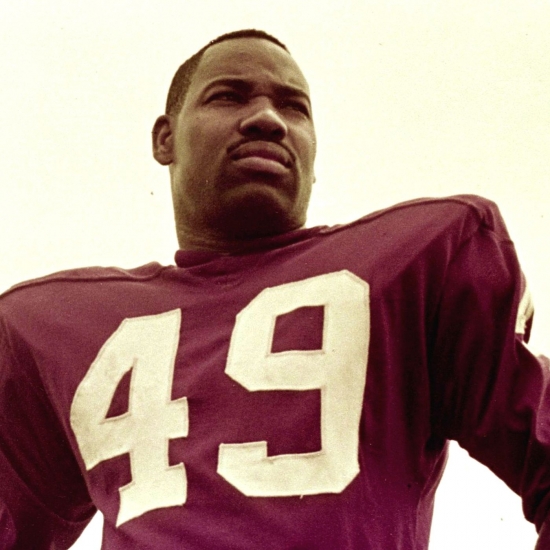 Pro Football lost one of its greats as Bobby Mitchell passed away today at the age of 84.

A star at the University of Illinois, Mitchell was chosen by the Cleveland Browns with their seventh round pick in 1958.  Mitchell would share the backfield with the legendary Jim Brown, where he would play four seasons, totalling 3,759 Yards from Scrimmage with 32 Touchdowns.

In 1962, the Washington Redskins were under pressure from the NFL, as they were not yet integrated, and they would trade for Mitchell. He was moved to Flanker, and he would promptly lead the NFL in Receiving Yards in both 1962 and 1963 with seasons of 1,384 and 1,436 Yards respectively.  Mitchell led the league in Touchdown Receptions in 1964, and would manage to accrue at least 800 Receiving Yards from 1964 to 1967.

He retired after the 1968 season after accumulating 14,078 All-Purpose Yards with 88 Touchdowns.  The four-time Pro Bowl Selection would later serve as in the Redskins Front Office for over three decades.

Mitchell would enter the Pro Football Hall of Fame in 1983, and he earned three Super Bowl Rings as a Redskins Executive.

We here at Notinhalloffame.com would like to extend our condolences to the friends and family of Bobby Mitchell

Kirk Buchner, "The Committee Chairman", is the owner and operator of the site.  Kirk can be contacted at [email protected] . Email This email address is being protected from spambots. You need JavaScript enabled to view it.
More in this category: « Our All-Time Top 50 Chicago Cubs are now up RIP: Al Kaline »