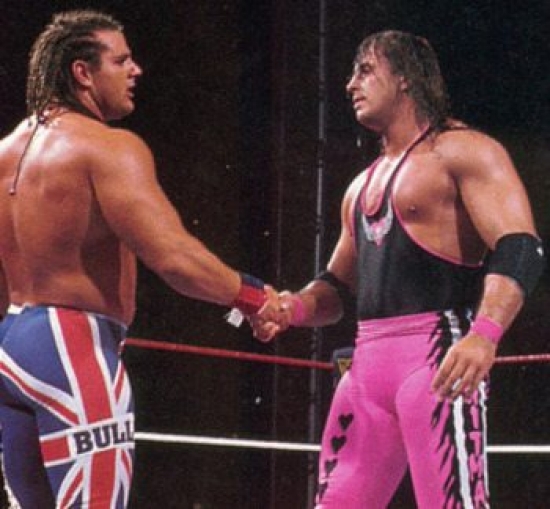 While this hasn’t been confirmed by the WWE, it was reported by WhatCulture.com that Bret “Hit Man” Hart will be the one who will be inducting the British Bulldog into the WWE Hall of Fame this year.

At one time, Bret and Davey were brothers-in-law, as Smith married Bret’s sister, Diana.  The two worked together often in Stampede Wrestling in Calgary, and when they arrived in the WWF together in the mid-80’s they wrestled against each other often in their respective tag teams, The Hart Foundation and the British Bulldogs.

By the early 90s, both Hart and Smith were singles wrestlers and at Summer Slam 1992, Smith defeated Hart for the Intercontinental Title in the main event at Wembley Stadium.  The two would later feud over the WWF World Heavyweight Title in the mid-90s, and would be part of the new Hart Foundation stable in 1997.

When Hart left the WWF following the Montreal Screwjob, Smith followed him to WCW.  Smith passed away in 2002 following a heartattack.

At last year’s ceremony, Hart was inducted for a second time as one half of the Hart Foundation tag team, with the late Jim “The Anvil” Neidhart.  During his acceptance speech, a crazed fan charged the ring and tackled Hart.  Many of the wrestlers in attendance quickly took out the attacker.  We are thrilled that this did not deter Hart from returning back to the ceremony.

More in this category: « Darren Sproles feels he is a Hall of Famer The Pro Football Hall of Fame will have two ceremonies »