The Giants will retire Eli Manning and Michael Strahan's number 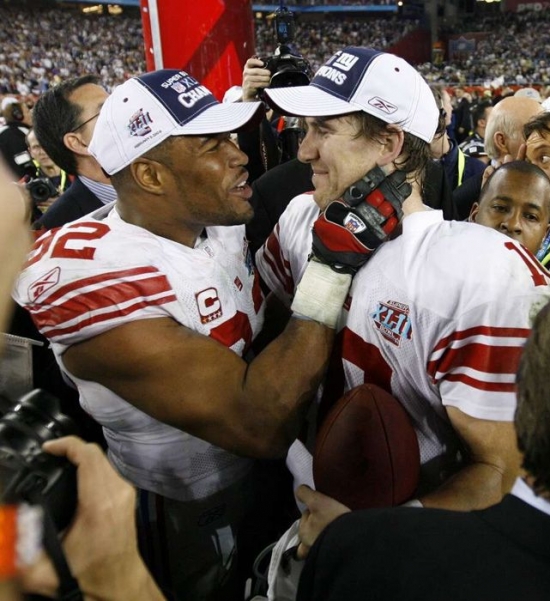 Regular visitors of Notinhalloffame.com know that we are slowly working on the top 50 of every major team in the NHL, NBA, NFL and MLB. Once that is done, we intend to look at how each team honor their past players, coaches and executives.  As such, it is news to us that New York Giants co-owner, John Mara, stated in a recent interview that Eli Manning and Michael Strahan will have their numbers retired.

This is what he said about Eli’s number:

When asked to clarify, Mara responded:

“Not yet.  We’ll do Michael’s (Strahan) announcement another day, but Eli’s will be retired.”

As for when that will happen is anyone’s guess.

Wearing #10, Manning announced his retirement this past Friday.  Playing at Quarterback, Manning threw for 57,034 Yards and 366 Touchdowns, and led the Giants to two Super Bowl Championships, both over the New England Patriots.  He was named the MVP in both of those games, and he is eligible for the Pro Football Hall of Fame in 2025.

As for Strahan, he has already been inducted into Canton, which occurred in 2014.  Like Manning, Strahan played his entire career with the Giants and he was the 2001 Defensive Player of the Year.  The seven-time Pro Bowl won a Super Bowl in his last game in the league.  He wore #92, which has never been issued since his retirement.

We here at Notinhalloffame.com are looking forward to these events in the future and are hopeful that the Giants will move on this action soon.