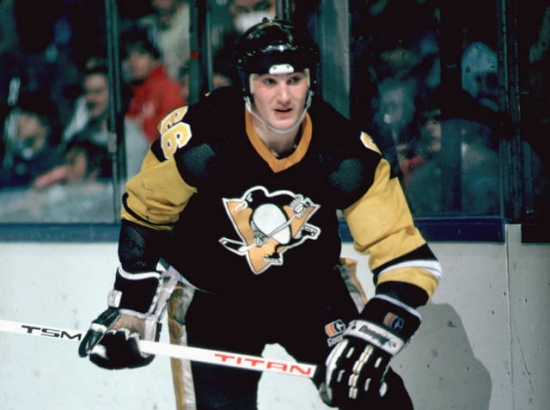 The city of Pittsburgh should erect as many statues as possible of Mario Lemieux.  If it wasn’t for him, there is a good chance that Pittsburgh Penguins would not exist today.  The Penguins did not draw well, and they were more often than not on the losing end, but everything changed when "Super Mario" was drafted first overall in the 1984 Draft.

Lemieux would create immediate impact, scoring on his first shot, and he would go onto have 100 Points in a Calder Trophy winning season.  Pittsburgh became a must-watch team with Lemieux leading, and he rivaled Wayne Gretzky as the best player in hockey.  The star Center would win his first Hart Trophy as the NHL's Most Valuable Player in 1987-88 as well as the Art Ross Trophy with 168 Points.  Lemieux would exceed that total with a career-high 199 and his second Art Ross, though he would miss out on the Hart to Gretzky.  As phenomenal as Lemieux was becoming, more importantly, the Penguins became a really good hockey team.

Back issues kept Lemieux out of much of the 1990/91 season, but he came back and led the Pens to their first Stanley Cup while winning the Conn Smythe.  Lemieux would take Pittsburgh to another title the year after while also winning the Art Ross despite playing in only 64 Games.  He was even more impressive the season after winning the Art Ross again with 160 Points while only playing in 60 Games.  He would win his second Hart Trophy that year.

His back continued to give him issues, and he would also contract Hodgkin's Lymphoma resulting in him missing the entire 1994-95 Season.  He would return for the 1995-96 campaign, and few expected him to be a dominating player, but that is precisely what he was.  Lemieux would again win the Art Ross Trophy and his third Hart Trophy.  The Centre captured his sixth and final Art Ross Trophy in what was supposed to be his last season as he retired from playing hockey.  Lemieux was fast-tracked into the Hockey Hall of Fame, but behind the scenes, something very interesting was taking place.

The Penguins were in financial disarray due to complete mismanagement, and they were in debt up to $90 million, with $32.5 million being owed to Lemieux in the form of deferred salary.  It was so bad that the Pens filed bankruptcy in 1998, but Lemieux had an idea…he would buy the team.

One can argue, and we will, that Lemieux saved the team twice.

He used $20 million of his deferred salary into equity, and with another $5 million, he was able to work out a deal that gave him controlling interest of the team.  Lemieux still had the itch to play, and in 2000, he would become the third player to suit up after he was inducted into the Hockey Hall of Fame.

Lemieux could still play, and with him on the ice, the Penguins were a bigger draw, and his investment in the team was quickly recouped.  In 2000/01, Lemieux was named a Second Team All-Star and finished second in Hart Trophy balloting.  He would play until he retired for good after 2005-06, but as an owner, he would win three more Stanley Cups making him the first man to have his name engraved on the Holy Grail of hockey as both a player and an owner.

His career would conclude with 1,723 Points with a PPG of 1.88, second only to Gretzky.

The fantastic thing is, had it not been for the number of ailments that he had, his colossal list of accomplishments would be even greater.

More in this category: 2. Sidney Crosby »