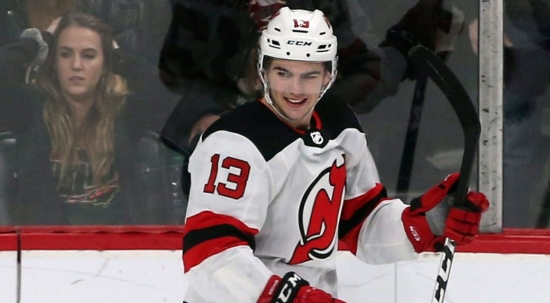 Drafted number one in the 2017 NHL Draft, Nico Hischier made history as the first player from Switzerland to be taken with the first pick by the New Jersey Devils, the team he is still playing for.

Hischier, as expected, made the opening day roster in his inaugural year in North American professional Hockey, and did well with 52 Points and a seventh-place finish for the Calder.  The next three seasons were a struggle for Hischier, who had 104 Points in 148 Games in that time frame, and though he represented the Devils in 2020 in the All-Star Game, it was a disappointing run for the Swiss Center.

It may have turned around for Hischier last year, as he had 60 Points, showing improvement in all facets of his game, and appears to be on the right path.  Hischier may not have lived up to the expectations of a number one pick, especially considering that Cale Makar was taken in the same draft, but there is still time.

More in this category: « 49. Lanny McDonald