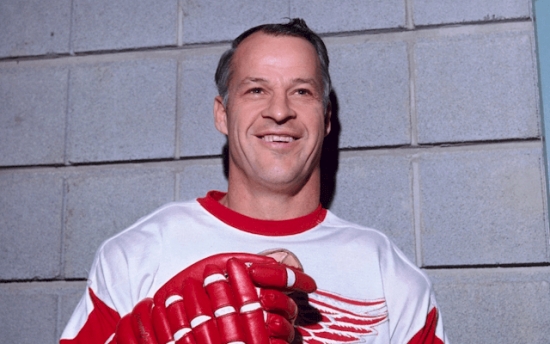 Think about this for a second.

The Detroit Red Wings are an Original Six NHL Team with multiple Stanley Cups, a plethora of Hall of Famers, and yet there is only one player that could be considered the greatest player in their history.

That man is Gordie Howe.

Howe debuted for Detroit as an 18-year-old in 1946, and the Red Wings knew they had a tough customer on their hands.  As a rookie, he only scored 22 Points, as he was more in tune with proving he belonged physically as opposed to showing his natural hockey skills.

In 1948-49, Howe was named a Second Team All-Star and was again the following season. The Right Wing was a force that post-season, winning his first Stanley Cup, and before long, Howe was the best player on what was hockey's best team.  That in itself was no small feat, as the team also housed Sid Abel, Ted Lindsay, and Terry Sawchuk.  Howe did it all.  He could score, pass and fight, and the “Gordie Howe Hat Trick" was coined, which comprised a goal, an assist, and a fight in a game.  The Red Wings were so good that they went on a seven-year run of leading the NHL in Points (1948-49 to 1954-55)

From 1950-51 to the 1953-54 Season, Howe was named a First Team All-Star, and he won the Art Ross in all of those seasons.  The Right Wing led the NHL in Goals the first three of those years, was first in Game-Winning Goals in all of them, and he won the Hart Trophy in the middle two.  Howe also led Detroit to the Stanley Cup in 1952 and 1954.  While Howe was not a post-season All-Star in 1954-55, he took the Red Wings to another Stanley Cup that year, his fourth overall.

Howe then embarked on a 15-year run where he was either a First or Second Team All-Star. While he would progressively lose the stars around him, Howe remained at an elite level, winning two more Hart and Art Ross Trophies (1957 & 1963).  From 1949-50 to 1968-69, Howe was in the top six in Points per Game, leading the NHL in that category seven times.  Howe might be remembered best for his work in the 1950s, but he was still among the elite throughout the 1960s too.

Howe retired after the 1970-71 Season and joined the Red Wings front office.  He would be fast-tracked to the Hockey Hall of Fame in 1972.  His no.9 was also retired by the team.  Howe would later become the first player Hall of Famer to return to the professional ranks, but not with Detroit.

Howe felt underutilized by the Red Wings brass, and he accepted an offer to join the Houston Aeros of the WHA and play with his sons Marty & Mark.  He joined the New England Whalers and stayed with them when they became the Hartford Whalers in 1979 and joined the National Hockey League.  He was over 50 when that happened.

With the Red Wings, Howe scored 1,809 Points, was a twelve-time First Team All-Star, a nine-time Second Team All-Star, won six Harts, six Art Ross Trophies, and four Stanley Cups.  Many hockey pundits still think that Gordie Howe is the greatest hockey player of all-time and not just those based in Detroit.

More in this category: 2. Nicklas Lidstrom »