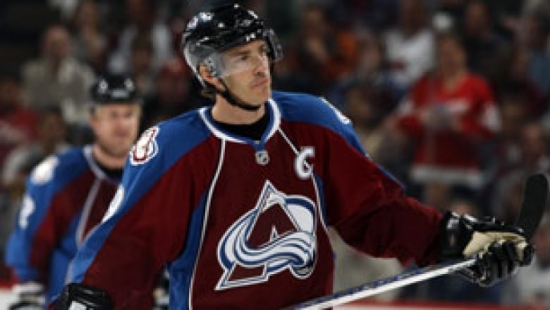 There have been a plethora of phenomenal players who have suited up for the Quebec Nordiques/Colorado Avalanche.  Still, it was effortless to choose Joe Sakic as the greatest Avalanche player ever.

With the Avs for his entire 21-Year career, Sakic was drafted 15th Overall, where many non-Hall of Famers were chosen ahead of him.  The center was a visible gem who would become a twelve-time All-Star, the first of which took place in 1990.  What made him so special was not just his ability to put the puck in the net and set up his teammates.  Sakic rarely made mistakes on the ice, and would quickly become regarded as one of the best leaders of the game.

When the franchise relocated to Colorado for the 1995/96 season, the team put it all together, winning their first Stanley Cup.  While this was undoubtedly bitter for Quebec City, those who followed Sakic were thrilled to watch him in the Stanley Cup Playoffs, where he would lead all skaters in Points and would win the Conn Smythe Trophy as the MVP for the post-season.

That was great, but the best was yet to come!

Sakic would have his best season in 2000-01, where he would again take Colorado to a Stanley Cup win, and individually, he would win the Hart Trophy, Lady Byng, Lester B Pearson Award, and had a career-high in Goals (54) and Points (118).  Also named a First Team All-Star, Sakic would again secure that accolade two of the next three seasons.

Sakic would be inducted into the Hockey Hall of Fame in 2012, his first year of eligibility.

More in this category: 2. Peter Forsberg »