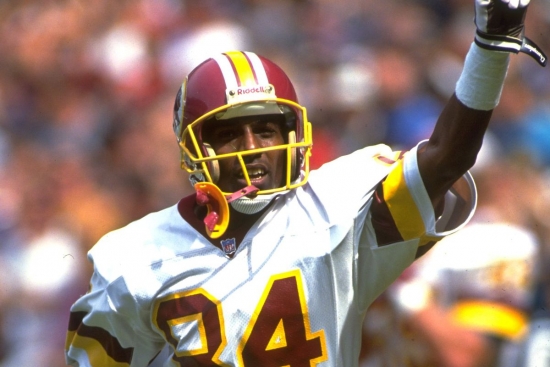 Gary Clark was so good at James Madison that he would later become the first football player to have his number retired.  That being said, Clark did not begin his professional career in the NFL, as it was the Jacksonville Bulls of the USFL, which would become his first landing spot.

After the USFL folded, Clark joined the Washington Redskins, who chose him in the Second Round of the 1984 Supplemental Draft. Clark’s inaugural NFL season was a good one that saw him accrue 926 Yards.  He proved he was no fluke, as he went to the Pro Bowl in the next two years, with both campaigns earning All-Pro accolades.  Clark would help them win the Super Bowl that year, catching a Touchdown in their championship win over the Denver Broncos.

The Wide Receiver dropped below 900 Yards in 1988, but he went back over the four-digit mark the next three years, with the latter two again earning a Pro Bowl nod.  Clark again was a Super Bowl champion in the 1991 season, which was coincidentally the only year he had at least 10 Touchdowns.

Clark played one more season with the Redskins, just missing 1,000 Yards.  He would sign with the Phoenix Cardinals after the 1992 season.

Clark would accumulate 8,742 Receiving Yards with 58 Touchdowns as a Redskin.