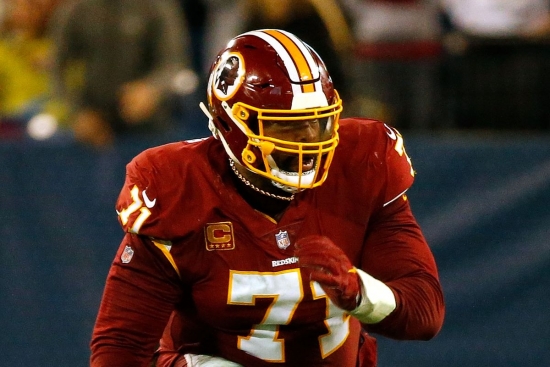 The first Offensive Lineman chosen in the 2010 NFL Draft was Trent Williams of Oklahoma, whom the Washington Redskins selected with the Fourth Overall Pick.  As gridiron history would show, it was an excellent choice.

Williams was anointed the starting Left Tackle for Washington, and arguably his first two seasons in the NFL were average at best. That changed in 2012 when he would rattle off seven straight Pro Bowls and was without question one of the elite Left Tackles of that timeframe, which was reflected by five consecutive years (2012-16) of double-digits in Approximate Value.

The end of Williams' Redskins career sadly ended with a thud.  In April of 2019, he had a procedure done to remove a growth from his head that was diagnosed as dermatofibrosarcoma protuberans.  It was alleged that Redskins staff first noticed it in 2013 and told Williams it was not serious, but clearly, that was not the case.

Williams was clearly upset and demanded a trade, but Washington did not trade him during the season, and when he did try to come back, he flunked a physical.  Williams would be traded in the 2020 off-season to the San Francisco 49ers.

As a Redskin, Williams started all but one of his 120 Games and had a more than healthy Approximate Value of 80.