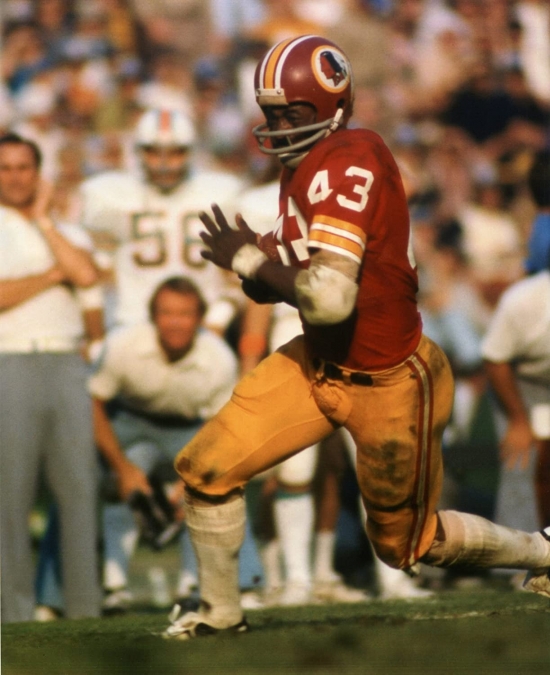 Larry Brown was considered an underachiever at Kansas State, which explains why he dropped to the Eighth Round in the 1969 Draft despite his immense talent.  The Washington Redskins were the team that took him, and new Head Coach, Vince Lombardi had a special project on his hands.

The man for with the Super Bowl Trophy noticed during training camp that Brown didn’t react until slightly after the ball was snapped.  He discovered that Brown had poor hearing, and he arranged for him to have a headset in his helmet, which allowed him to hear the cadence of the Quarterback, and he was an “underachiever” no more.

Brown became the Redskins’ starting Running Back, and in his first five seasons, he was Washington's primary offensive weapon. A dual-threat, Brown had at least 1,100 Yards From Scrimmage in all of those five years, winning the Rushing Title in 1970 and the APY Title in 1972.  In that latter season, Brown won the AP MVP, Bert Bell Award, and the Offensive Player of the Year, and he led the Redskins to their first Super Bowl appearance.  Washington didn't win, losing to Miami, but without Brown, they never get there.

The injuries piled up, and after two mediocre seasons and one horrible one, Brown retired in 1976, after having put together 8,360 Yards From Scrimmage with 55 Touchdowns.