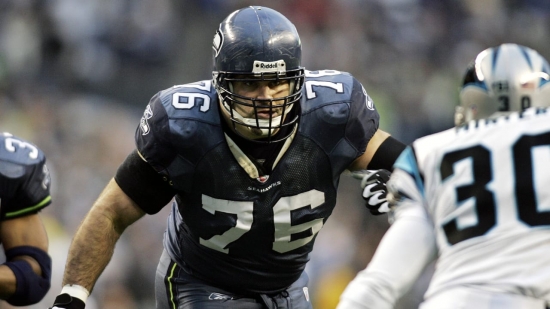 At the University of Michigan, Steve Hutchinson helped the Wolverines win a title in 1997 and was an All-American in 2000.  The Seattle Seahawks were fortunate that the Offensive Lineman fell to them with the 17th overall pick of the 2001 Draft.

Hutchinson was anointed as the Seahawks starting Left Guard, where he was an All-Rookie.  Hutchinson would go to three Pro Bowls with Seattle (2003-05), where he was a First Team All-Pro in two of them.  His work was instrumental in Shaun Alexander winning the AP MVP in 2005, and the Seahawks reaching their first Super Bowl.  That game would be the final one for Hutchinson as a Seahawk, as he signed with the Minnesota Vikings in the off-season.

Hutchinson was chosen for the Pro Football Hall of Fame in 2020.