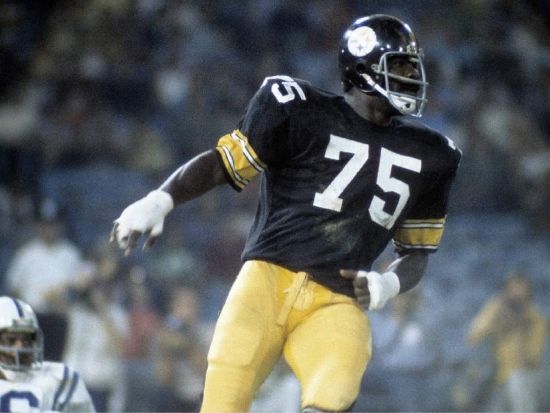 When many publications or blogs come up with "Mean" Joe Greene as the greatest Pittsburgh Steeler of all-time, they seem to make the selection seem so any. We came up with Greene as our top player in franchise history, but it was a struggle with many legends who could have easily been placed at number one.  One thing above all else, though, is when you think of what embodies a Steeler, it is hard to come up with a better man than Greene.

Playing his college ball at North Texas, Joe Greene was drafted by the Steelers with the number 4 pick, and he was the player that the Steel Curtain was built around.  You can take it a step further and say everything changed when Greene and Head Coach Chuck Noll arrived in 1969, as despite the longevity of the Steelers franchise, they had never won a Championship.

The Steelers had no winning culture, and Greene had said in past interviews that he was not happy to have been drafted by Pittsburgh.  The wins did not come in his rookie year, as Pittsburgh only had one "W," but Greene was a bright spot, named to the Pro Bowl and also the Defensive Rookie of the Year.

The Steelers acquired more talent through the draft, and by 1972, they assembled one of the most dominating defensive lines ever.  The Steel Curtain had arrived, and they were now Super Bowl contenders.  Greene won the 1972 Defensive Player of the Year Award, and two years later, he did so again, but it was a far more special year for Mean Joe.

The Steelers lived up to their promise by winning Super Bowl that year, and they did so again the season after.  The Steelers defense remained the most vaunted unit in football, and with Greene as their leader, they won two more Super Bowls before the decade closed out.

Injuries compiled on the Defensive Tackle, and he retired after the 1981 season with 78.5 "unofficial tackles" and 10 Pro Bowl Selections.  Greene led by example, often without having to say a word, and it is not without merit to say that if it were not for Greene, the Steelers wouldn't be the Steelers.

Greene entered the Pro Football Hall of Fame in 1987, and 30 years later was named to the Steelers Hall of Honor.  Greene is also one of two legendary Steelers to have his number retired.