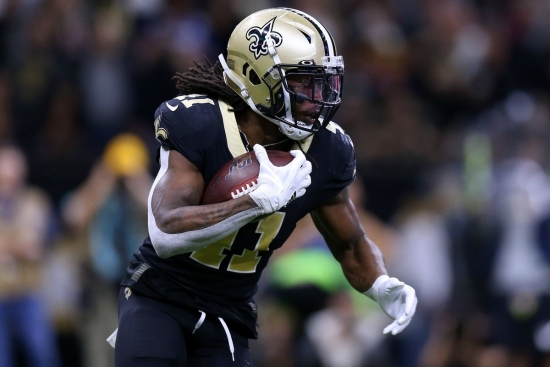 Is this rank too high, too soon?

It could be, but Alvin Kamara has been such a dynamic weapon in the three years he has been with New Orleans that the cliché of gamechanger is more than applicable.

Saints Head Coach, Sean Payton, gushed to anyone who would listen as to how much he loved Kamara in his rookie training camp.  Sure enough, the former Tennessee Volunteer had 1,554 Yards from Scrimmage, 13 Touchdowns, and was a Second Team All-Pro, a Pro Bowl, and was the Offensive Rookie of the Year.  Kamara followed that up with an even better year with 1,592 YFS with 18 Touchdowns, and a second Pro Bowl.  Kamara again was a Pro Bowler in 2019, this time with 1,330 YFS.  Throw in the Return Yards, and we have a player who already has over 5,000 All-Purpose Yards, and you have one of the best multi-threat Backs that the Saints ever had.

Now we are starting to think this rank is too low!