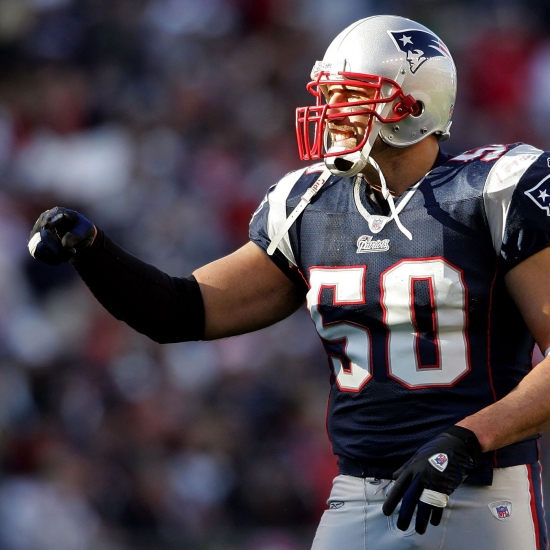 After four seasons flying under the radar with the Pittsburgh Steelers, Mike Vrabel signed as a Free Agent in 2001 with the New England Patriots.  The move likely was noticed by only the most diehard Pats fans, but as it turned out, the signing was a steal.

Vrabel became a starting Linebacker during his first year in New England, and he was solid in their run to their first Super Bowl win.  While Vrabel was never really in the discussion for the best defensive player on the Patriots (except for 2007, when he was a First Team All-Pro), he was a leader and a tenacious player who led by example.  Vrabel helped the Patriots win two more Super Bowls, and he had 8.0 playoff sacks for the team.

A unique fact about Vrabel is that he was occasionally used on offense as a Wide Receiver.  He caught eight passes for New England, all of which were Touchdowns! Vrabel also had two Touchdowns in two different Super Bowls.  How many other Linebackers can say that?

Vrabel was traded to the Kansas City Chiefs before the 2009 season, where he played two more years before retiring.  Vrabel had 11 Interceptions, 48.0 Sacks, and 606 Tackles as a Patriot.