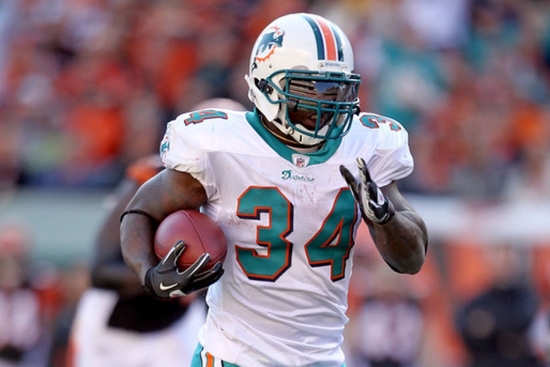 There is so much to digest when looking at the career of Ricky Williams, and that was before he got to Miami!

The New Orleans Saints famously gave up an entire draft class to get him, and Williams even more famously signed an idiotic contract.  Williams played well, but the expectations were so high that he was unable to live up to them. A change of scenery was necessary for both parties, and before the 2002 Season, he was traded to the Miami Dolphins for four high-round picks.

In his first season as a Dolphin, Williams won the Rushing Title (1,853 Yards) with a First Team All-Pro nod.  Williams finally lived up to his potential, but the drama never left the Running Back.  He would finish tenth in Rushing Yards in 2003 (1,372), but he would abruptly retire, and missed the 2004 season, though he would likely have missed it anyway, as he was suspended for four games for marijuana use, and flunked another one. He came back for 2005, but again was suspended for pot use, and was suspended for the entire 2006 season.

Williams played instead in Toronto for the Canadian Football League but would be reinstated by the NFL in late 2007.  He played three more seasons with Dolphins, gaining another four-digit year on the ground with 1,132 Yards in 2009.

He had one final season in football with a year as a Baltimore Raven, and as a Dolphin, he had 6,436 Rushing Yards with 68 Touchdowns.  The numbers that Williams had was decent, though what he could have had would have been so much more had he been focused.