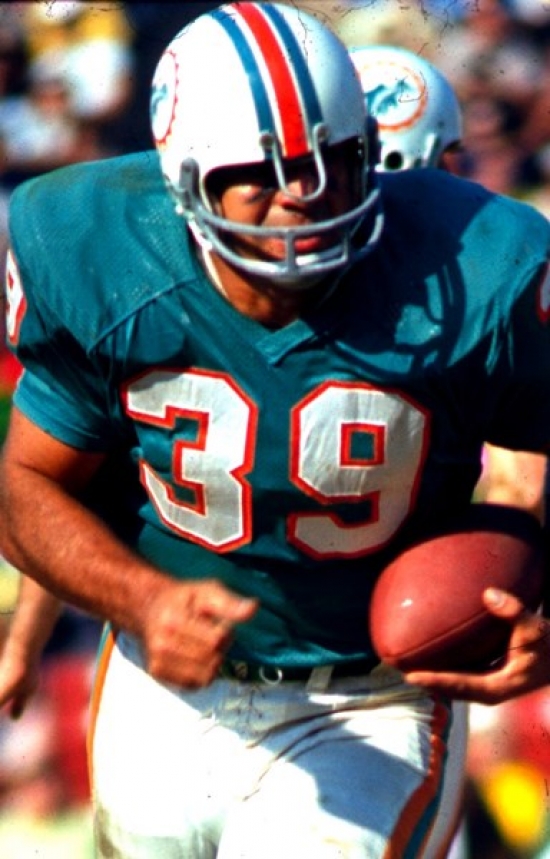 Larry Csonka was the first Back drafted in 1968, but the first two seasons were a struggle due to poor play and injuries.  While the start would not be great, the arrival of Don Shula in 1970 changed all of that.

Csonka got healthy, and he improved his fundamentals, and with a powerful lead forearm, he hurt people before they could hurt him.  His rushes in the first half of the 70s were the stuff of NFL Films legend, and from 1970 to 1974, he would be named to the Pro Bowl, with two of those years earning a place as a First Team All-Pro.  From 1971 to 1973, he rushed for over 1,000 Yards, and he was a beast long before Marshawn Lynch and “Beast Mode” existed.

Like many players, Csonka would leave the NFL for the upstart World Football League, but after that folded, he went to the New York Giants.  Csonka returned to Miami in 1979, where he had a comeback year, winning the PFWA Comeback Player of the Year in an 837-yard year, where he had a career-high 12 Touchdowns.  The Fullback decided to retire after that, and he would later enter the Pro Football Hall of Fame in 1987.  Csonka earned the ultimate honor in Miami, when his #39 was retired in 2002.  This happened 12 years after his name was added as part of the first Honor Roll.