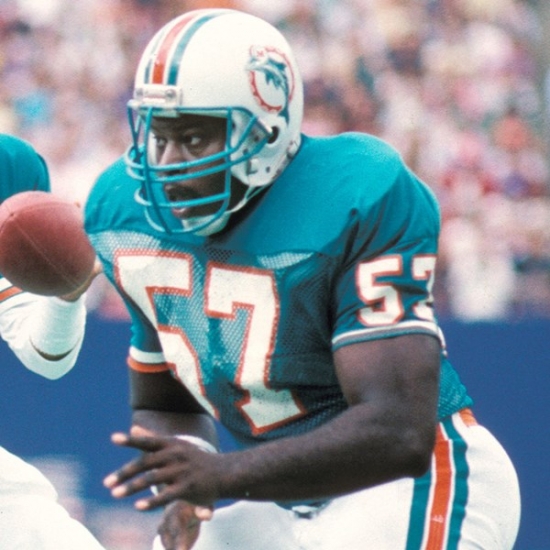 Dwight Stephenson played mostly on Special Teams in his first two seasons in the NFL after being chosen from Alabama in the second round of the 1980 draft, but by 1982 he was ready to become one of the best Centers in the game.

Stephenson would go to the Pro Bowl in 1983 and continued that honor over the next four seasons.  In 1983, Quarterback, Dan Marino was drafted, and as he became a megastar, it was Stephenson who led the Offensive Line that would protect one of the most exceptional passers of all-time.  From 1984 to 1987, Stephenson was a perennial First Team All-Pro, and there were few, if any, defensive players who could get past him, and if they did, it rarely happened again.  He was also known for his philanthropic work, and he would win the Man of the Year Award in 1985.

A knee injury cut short his 1987 season, and he elected to retire afterward.  Stephenson entered the Pro Football Hall of Fame in 1998, and the Dolphins Honor Roll in 1994.