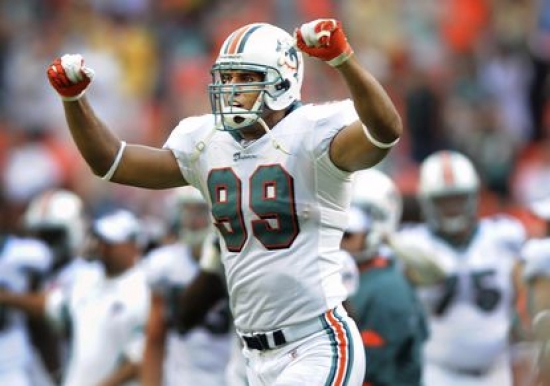 A two-time All-MAC player at Akron, Jason Taylor was a Third Round pick in 1997, where he was an All-Rookie player.  That first year was a good start for a Defensive End who would become a great player.

Taylor was considered to be a solid player in his first three seasons, but he broke out in 2000 with a First Team All-Pro and the beginning of what would be six Pro Bowls.  He had 14.5 Sacks that year and a career-high 19 in Approximate Value.  Taylor built on that with five more ten sack years, including a league-leading 18.5 in 2002, which coincided with his second First Team All-Pro selection.  The Defensive End was a First Teamer again in 2006, which would see him cause a whopping nine Forced Fumbles.  That year, Taylor would be named the AP Defensive Player of the Year.  The season after was his sixth Pro Bowl year, and he was also chosen as the Walter Payton Man of the Year, a testament to his charitable nature.

After being traded to Washington in 2008, he came back as a Free Agent for one year, before joining the New York Jets.  That also was for one year, and he came home for a final season to finish his career.

As a Dolphin, Taylor would secure 131.0 of his 139.5 Sacks and would also have 43 Forced Fumbles and 27 Fumble Recoveries.  The Dolphins inducted him into their Honor Roll in 2012.

Taylor was elected into the Pro Football Hall of Fame in 2017.