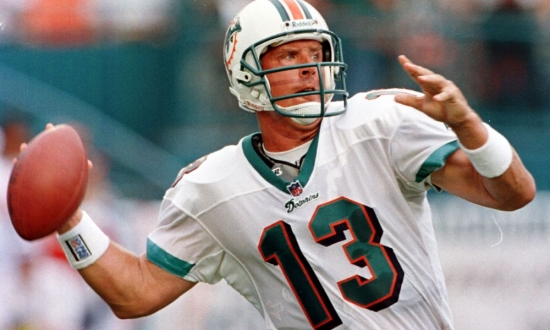 A First Round pick from Pittsburgh, Dan Marino would win the starting Quarterback job during his rookie season in 1983.  He was an All-Rookie and Pro Bowl selection, but that was just the beginning of what would become one of the most phenomenal careers ever by a Quarterback.

In the next three seasons, Marino would be named a First Team All-Pro and lead the NFL in Completions, Passing Yards, and Passing Touchdowns, with the 1984 season shocking the world of Pro Football.  Marino set since broken records of 5,084 Passing Yards and 48 Touchdown Passes, and he would take Miami to the Super Bowl.  They did not win, but there was no doubt in the mind of anyone that Marino was the elite Quarterback of the hour.

He would have two more years where he would lead the NFL in Passing Yards, and he was overall a nine-time Pro Bowl Selection.  Marino couldn't run, but he never really had to.  He had one of the quickest releases, and along with an accurate arm, he made stars out of average Wide Receivers.  When he retired, he was the all-time leading passer and held every recognizable throwing record.  While he never won a Super Bowl, it was not because he didn't give it everything he had.  A lack of a running game was always his undoing, but as long as Marino was playing, the Dolphins were still contenders.

What Dan Marino did as a Quarterback was unprecedented for his time.  While there will be many more QBs who will surpass what he did statistically, it should never be forgotten when he did it, and how few could match him at the time.

Marino would be inducted into the Pro Football Hall of Fame in 2005, and he would later be chosen for the NFL 100th Anniversary Team.  The Dolphins also honored Marino in 2000 by making him the second Dolphin to have his number retired.  They also enshrined him in their Honor Roll that same year.